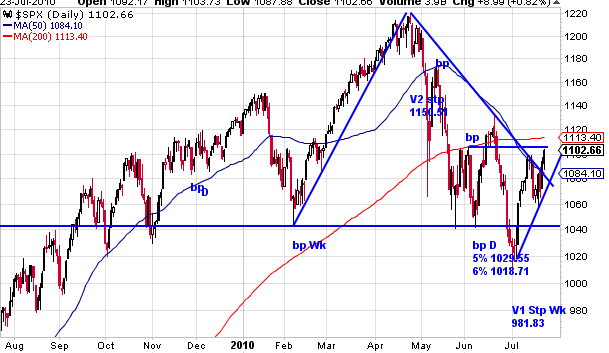 We sometimes admonish (also abjure, berate, harass and warn) our graduate students about finding bunny patterns in the clouds in their initial enthusiasm for identifying patterns.  Being the world’s foremost exponent (or proponent) of pattern recognition this might sound strange.  Mox nichts.  We just worry about getting the job done.  This might be a head and shoulders — the favorite pattern of bunny fanciers (who are also busy with Signor Fibonacci counting bunnies).  If it is it forecasts a target of 981.83.

But at the moment what is more important is this:  We are in a 16 day upwave (8 up, 6 down, 4 up) which is the longest upwave we have seen since April.  The wave has broken the downtrend line from the top as well as the high of July.  What we have here is sideways markets within the basic downtrend started in April.

The primary rule of pattern identification is to wait until the pattern resolves itself.  What if the pattern which is now developing over the last 45 days is a Kilroy (H&S) Bottom?  (price has moved above the 50 day moving average — for what that’s worth.)  Besides which a broadening pattern has developed in here — advertising uncertainty and warfare for control of the market.  It does not behoove one to take sides in these skirmishes. (Unless you like bloodshed — often your own.)   This is a trading market with the ultimate direction unknown.  But it should be remarked that this is a secondary in the bull market started in March 2009.

We have marked this chart with weekly and daily Basing Points and stops.  We are highly suspicious of the activity the first week in July which might have tripped some Basing Point stops.  We think this bull market is not dead until the weekly Basing Point stops are tripped.  You can see them there below the pattern marked as V1 for Version 1 calculations.

Of course don’t we all wish we had been clever enough (some readers were) to take the V2 stop back at 1150 — but the market could just have easily taken it out and gone on the 1565 — which it will sooner or later (remember you didn’t hear this here).  (Because we dislike forecasting — we feel about forecasting like we feel about ice cream.)

We also think as the market calms down here we will get some idea of which way we should be — in the meantime it’s a circus for traders.  But not fun for everyone — in case you didn’t notice Goldman has taken it on the chin during this period.  Basically only the lucky and crazy are making money here.  As they say about God and Drunks and loonies.