Notice how beautifully the top of this range is defined by the top horizontal line.  The bottom is also well defined, but not so beautiful.  Also the tenuous nature of the September trendline is obvious.  In July we had a downwave which gave us an excellent anchor for the uptrendline.  It is absolutely inevitable that this uptrend will retract, and probably soon.  It is now 25 days long.  The longer it lasts the more violent will be the downwave.  The downwave which began in April was a reation to the 56 day upwave.

Clever us (every once in a while, when we’re wiping the egg off our faces) we bought the SPX on August 27 as a trading tactic.  Readers who follow our Basing Point system would have gone long at the top in August and be still long, having been annoyed by the downwave we promised them.  We’re sorry about that.

But this trading range market has been particularly nasty throwing off false signals like Linecum throws curve balls for the Giants.

We think REE is in a speculative blowoff, but we already said that. 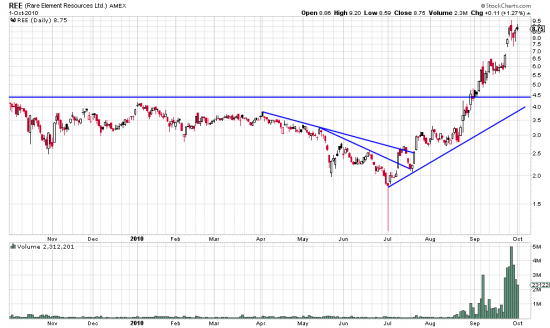 There is a lesson in gaps here. The breakaway gap is followed by a second gap which is quickly covered.  This is the characteristic of an exhaustion gap.  We always bail on a covered exhaustion gap.  That doesn’t mean we’re always right, but that is the E&M chartist’s method.

Readers should be paying close attention.  First of all the market has all these dicey situations, and second of all October is the witching month.  Review your stops and be certain they are set.  A bad stop is better than no stop at all.  If a stock has you buffaloed post it to the edwards-magee google group and we will look at it.  Don’t walk under any ladders, and if any black cats cross your path go home and go to bed.