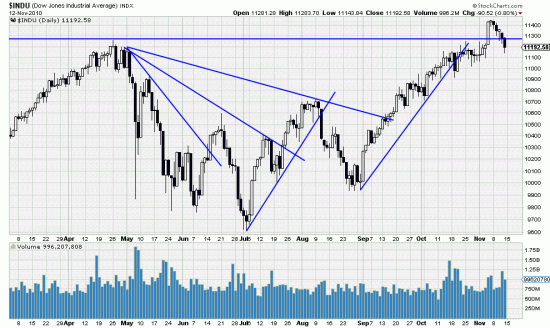 Friday we looked at the market after a six day down wavelet and considered (for trading purposes) whether to sell.  So we wound up increasing our position in the SPXl and in the Qs.  Monday we may be sorry,  or not.  But one way the week’s action may be regarded is as what old time technicians call a “throwback” — that is a return of prices to the breakout line.  There is of course the market fact that five days down in the market is a (at least) temporary buy signal — in normal times, if there are any of those left.

It is a little worrisome that Ashbaugh, in Marketwatch trumpeted a breakout on the powerbar which preceded this wavelet.  A breakout is never definitive until there is follow through.  This downwavelet is not really the kind of follow through that we like to see when we bought the breakout bar (which we did).

We also continue to be concerned about the broken trendline of 10/19, though the sideways wavelet that followed might satisfy those concerns. Monday should bring a bounce.  If it doesn’t, remember you didn’t hear it here.

Three trading days ago, on the long black power bar we allowed as how we didn’t like what was happening in the metals markets.  We still don’t like it.  But we don’t think the bull market is over yet by any means, though there may be some punishment in store right here.

What a shame it is that November 11th has faded from our memories.  The 11th hour or the 11th day of the 11th month the guns fell silent in World War I.  A war unequaled in its savagery and stupidity and gross negligence in the waste of lives.  Rivaled only by the same characteristics on the part of our Congress which for reasons of industrial efficiency — and to avoid capital wasting holidays — degrades the day by combining it with every other potentially capital wasting day of commemoration.

But then, someone has to  be taking care of business, since as was truly said, the business of America is business.  And what’s good for General Motors is good for America as Alfred Sloan said.

Watch out for low flying nostrums is what we said.