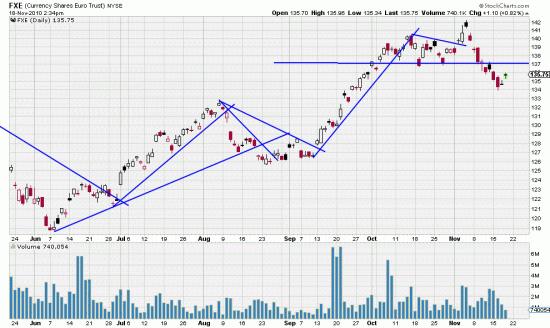 Most analysts have “indicators” that tip them off as to when the market is going to turn and when to buy and sell.  Some have indicators as to general market mood.  Outr general market mood indicator is an old west Texas cowboy named Michael who buttonholes us in the bars and coffee houses we frequent.  Michael says there is deep unease in the investment community.  We believe this 100%.  All you have to do to see symptoms of it is look at the major market indices over the past 10 days or so.  1.6% up, 1.78% down.  Enough to tip a trader off his surfboard.

What do you do when –as we said– investors and traders are as jumpy as frogs about to be turned into frog’s legs (with garlic)?  How about not participating?  Observe the Basing Point stops and let the snakes bite each other to death.  If you get down into the pit with them you’re a sure loser.  Tell us about it.  We’ve made a number of volatility trades lately and regret it.  Fortunately we were playing with small chips.

In the meantime, back at the FX corral, it looks like the euro may be set to resume its slide.  As in the chart of FXE above. 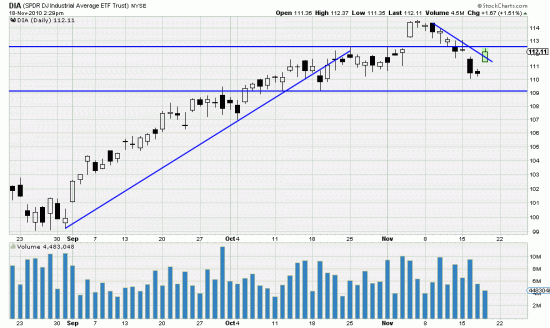 The market as represented by the DIA here continues to flirt with that resistance line.  Smart readers will watch the fun but absolutely refuse to participate in naked mud wrestling.

We have been short the bonds since mid-October and so should our readers be.  Municipal bonds are already taking gas (not natural gas — unnatural gas, which is the gas taken by investors who do not obey trendlines.  See MUB below.  We have been saying for several months that the safe haven everyone thought they were fleeing to was a trap.  Consider it sprung.

Will this happen to treasuries?  Only the Shadow knows.  But at this point every mark should know that treasuries are an IED waiting to explode — or already in the process of exploding.

You know how we hate handicapping stocks, but …