Readers cannot but be exasperated by the kabuki show taking place in Washington — as evidenced by today’s price behavior. A range of 21 points in the SPX — with an actual change of less than 2 points. Like a monkey watching a puppet show the market sits on its cage fence with its ear cocked to the Washington sound track. All hope gone? SELL! SELL!! Clowns will return to Congress to (not) solve problem? BUY! BUY!! Whiplash.

Meantime the market’s cliff is not too far away down there — here the trendline labeled 09, meaning of course that it originates in March 09. This trendline was broken in June 11 causing all sorts of havoc. Readers may have bad memories of August and September of 2011. We do. The trendline was 27 months long at that time. It is now 18 months longer, giving it enhanced power. Recently talking heads (empty) have begun to beat the doom-gloom drums because of the length of this bull market. No big deal though. Magee measured bull markets have lasted as long as 3500 days. Dow Theory measured bull markets have lasted similar lengths.

And — the trendline from October 11 (a year in length) was broken in October. It seems to us that all the implications of this break have not been worked out yet. This event and the brinksmanship in Washington explain the market volatility we have been seeing lately. 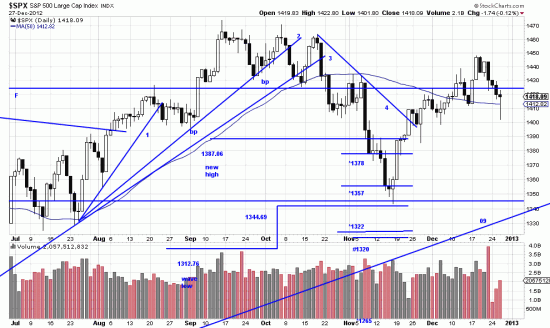 The real cliff is represented by the trendline below that, labeled 09, if penetrated decisively, would represent a true cliff and likely usher in a bear market wave to take back some of the profits we have gained since March 09. This is not a foregone conclusion that we surrender the profits. We will be watching closely and reversing to short to capture the profits from that trend.

This will happen. It is only a matter of time. But that time is not yet, in our judgement. There is some to go yet on this upwave.

Never look a gift market in the mouth…

Spanking shorts–as we were saying…