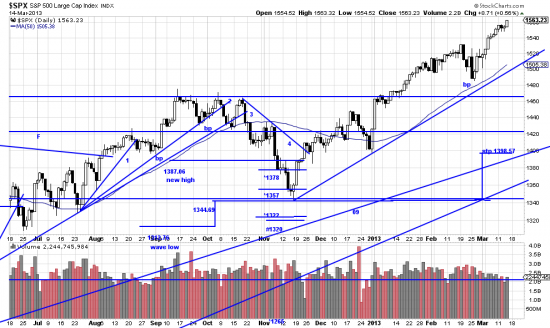 The SPX here, and the Dow has been on a run of consecutive advances not seen since 1996.  What does this tell us?  It tells us that a new phase has dawned.  We would expect that anyway when a major new high is made.  But this run on top of that screams bull market.  Even Richard Russell has turned bullish.  He was practically waterboarded to admit that we are in a bull market.  Let us point out that by the rules of every system we know (especially Dow Theory) a bull market is either declared or confirmed.

The bears with their paws caught in a steel trap are thinking of gnawing their paws off.  They are in serious trouble.  It would be bad enough for them under any circumstances, but it’s worse now, because the PUBLIC appears to be rejoining stocks.  And a good thing for them, because bonds are teetering on the brink.

This does not rule out the probability of a downwave here.  It will happen and our readers can laugh it off.  For the foreseeable future drawdowns should be short, shallow and rapidly reversed.  AND inevitable.   Looking at the chart it is interesting synchronicity of the Mar 09 trendline very near to the Basing Point calculated stop.  We have added on to our positions in the Dow and the SPX.

True, or not true? Trend, or contrarian rally?