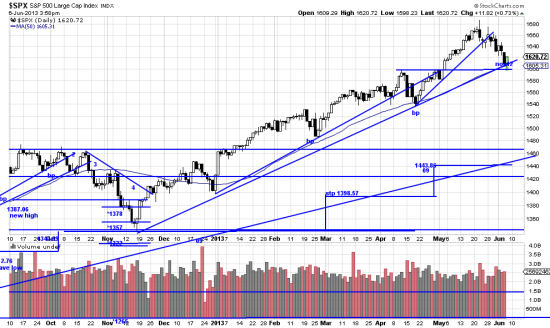 Over the past 20 plus days or so market tempo speeded up and got ahead of itself, especially so with so many contrarians aching to short the move they had so underjudged and missed out on.  Finally when Bernanke bobbled his testimony to Congress traders fled the market and contrarians jumped on.  They broke a relatively insignificant trendline and the resulting downwave is more or less (m/l) 4% .  But when that 4% includes a 38 point range day in the SPX and a 278 point day in the Dow the herd gets restless to where the least little lightning strike will start the stampede.  Or Garrison Keilor singing off key.

Today, however it appears that the important technical facts about the market have stemmed the downwave.  These facts include the trendline, the 50 day moving average (hugging the trendline), which many non technical analysts consider important (especially those shifting from foot to foot wanting to get in) and the horizontal line of support. 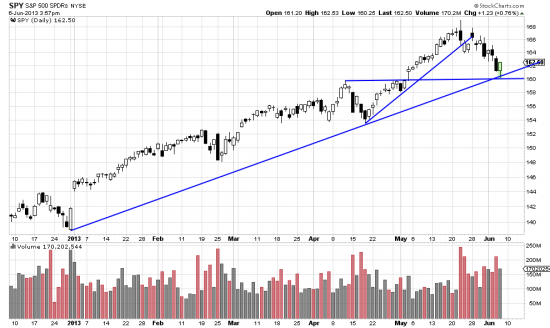 Here a close up of the SPY showing the various forms of support, as well as the short (25 days, m/l)  trendline broken to mark the downwave.  As we have said numerous times all trendline breaks have consequences,  but the consequences are usually commensurate with the length of the trendline.  As of now we would place a probability of 70% that the next trendline down (from Jan 13) will not be broken.  How the advance resumes is another question. 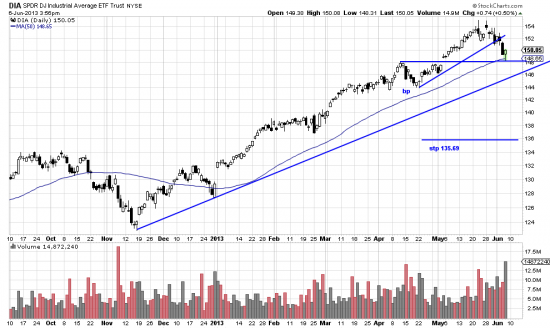 The DIA stop is illustrated here and is congruent with the SPX stop.  These stops are not just relevant for the indices.  A close below would demand the review of every position in the market and liquidation or revalidation of.

The probabilities of these stops being threatened in the present downwave in the present conditions is almost nil.  This downwave is somewhat difficult to analyze. (A-B-C,  alph-beta, etc)  The time to add on is not yet.  We will point it out in the coming days.

Watch out for Marketwatch…