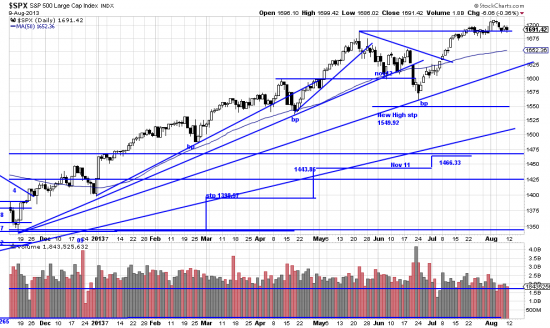 Technically…technically the buy signal which occurred 7 days ago on the power bar leaving the little congestion pattern has been thrown into doubt.  This happens because of lack of follow through and because of return of prices to the congestion area.  So we are left with temporary uncertainty.  But that is nothing new.  This bull market has been marked by doubt and skepticism since its inception.  But prices just keep on leaving egg on the faces of bears and doom sayers.

And that is still the situation.  There is not enough in this nothing week to impeach the trend.  And that’s about all that can be said for it.  Of course the market is nervous about Helicopter Ben  flying off into the sunset and taking his tapir with him.  And justifiably worried about whether the Shiite conservatives in the Whorehouse of Representatives (bought and paid for) will shut the government down over the debt ceiling next month.

These are valid concerns and could tear this bull market to shreds.  But it’s not in the chart yet — so we soldier on.  If you took the buy signal and added on we would put a different stop on the add on position — 5% under the entry price.

A closer look at the situation is here:

For what it’s worth we think this week is virtually meaningless.

Shining the apple, tarnishing the gold