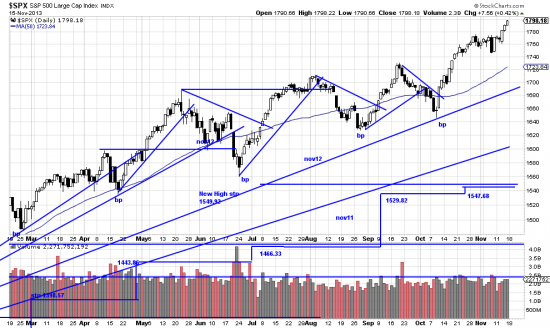 What must follow as the…whatever… is as we have remarked at least twice is a downwave after an upwave — except when the upwave is followed by a sidewave.  Which is what happened in this case, so it is worth discussing.  The last upwave was 15 days (129 pts, 7% m/l), followed by a sidewave of 11 days.  On Nov  7 contrarians mounted a vicious attack on the market.  In the SPX a range day of  28.3 points and finishing off the day about 23 or 24 points down.  The next day the market bounced back like a bungee jumper.  A colleague who counts many hedge fund and mutual fund managers in his circle noted that one of them had gnashed his teeth and said, why won’t this thing stay down?!

When the pros are wrong there are big profits to be made.  We remember October 1987 when the smart market-maker money was short puts.  Did we clean up on that one.  Of course our clientele was destroyed but.. Machts nichts.  Or, meh?

Prices have broken out of the sidewave: 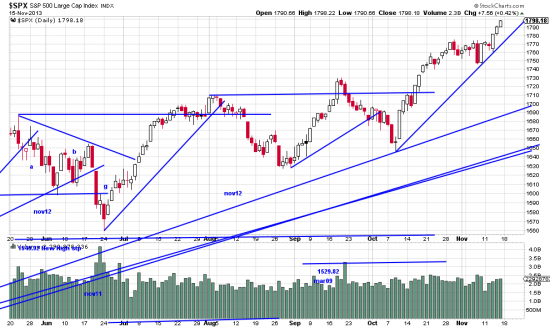 The last trendline is of little if any significance. Just a nervous tick we have.  (The tick is nervous because we are sending deet after it.)  It’s the bears who should be nervous.  The breakout should be a signal for adding on to bull positions.  But frankly we’re nervous too.  All this talk about teotwawki (the end of the world as we know it) would discombobulate a clergyman and as everyone knows we are of the zen buddhist persuasion.

But while we have our ears tuned for the resumption of the clapping of one hand it would not be unduly aggressive to add to spx positions (in moderation).

Bottom bottom who’s got a bottom?….