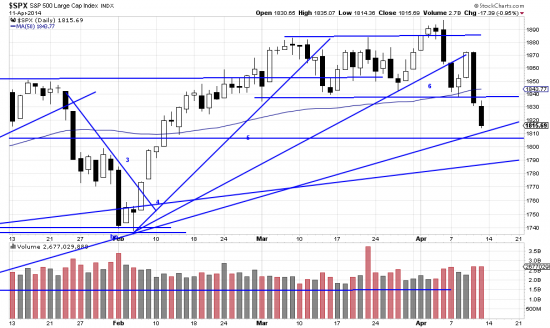 The market is sliding along the razor’s edge.  The SPX is only 9 points from the important trendline of nov12.  The formation has certain aspects of an alpha-beta-gamma pattern (or ABC) with the present wavelet in the gamma (C) phase.  Penetration of the nov12 trendline would be serious and might be the precursor (if that has not already happened) of a painful downwave.  We are presently somewhat hedged and certainly would fully hedge if that happened.  And perhaps even go net short.

The market has had a hole shot in it under the water line with the  foundering of the Compq.  (In fact one might short that as a means of hedging.) 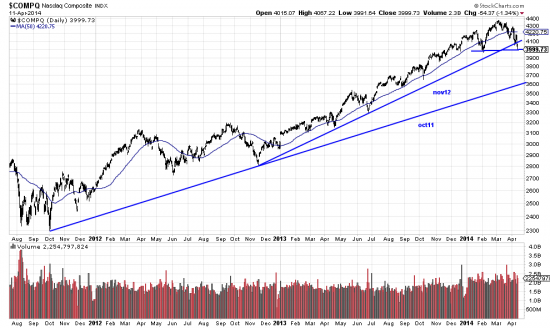 This issue is already breaking the nov12 trendline and is being battered in the market.

Readers now have the choice of sitting out this skirmish — which we estimate might be of painful but short duration — with for certain a strong bull to follow.  Or lightening up their portfolios.  Or hedging — with puts or inverse ETFs.

We will do some noodling over the weekend as to what exactly is going on — though this letter  tells what is going on technically.

The season of giving…

GM. What’s good for… is good for America…