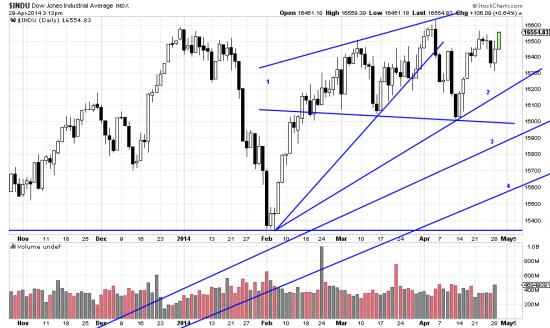 We have just remarked (last letter) on the fact that the PnF method has given buy signals in the indices.  Meanwhile there is a technical pattern called a conundrum on the charts.  It is composed of  a possible double top in the INDU, a possible head and shoulders in the Qs and a broadening pattern in the SPX.  Does that sound like pleasant conundrum?

In the INDU 1 marks also a broadening pattern in what might be the second top.  No 2, as is obvious is a short term trendline of limited importance in this context, except as a tripwire. No 3 is the nov12 trendline, and no 4 is the nov11 trendline.  These are consequential and in the present context might take priority over the Basing Point stop, which is 14573.  That is a consequential distance, and for ourselves, we will be hedging as the long term trendlines are broken — perhaps even on the breaking of  trendline 2.

Hedging is always fun (not) and almost never profitable.  It is like playing with porcupines.  But that is a characteristic of whipping sideways markets.  We call it whip saws.  Only idiot savants and cheaters (HFT) make money in these markets  — perhaps some contrarian very short term traders. 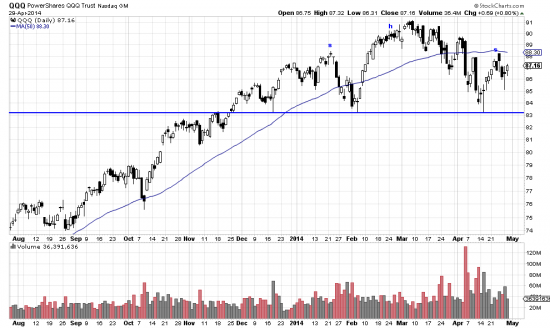 The potential head and shoulders is marked here — s for shoulders, h for head.  Penetration of the horizontal neckline would be a signal to exit and a decisive penetration (3%) would be a short signal. 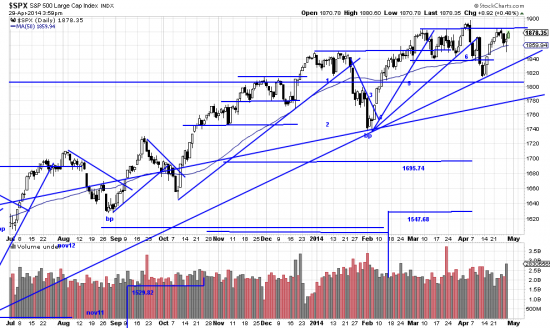 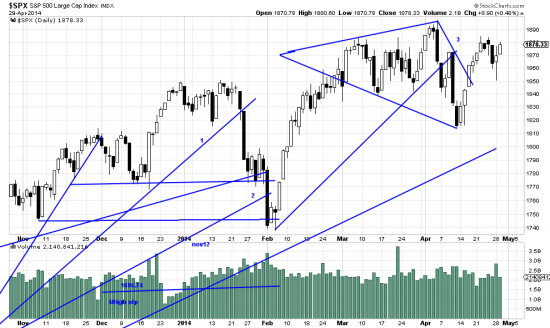 The top chart shows the long term stops in the SPX.  In the second the broadening pattern is illustrated.  None of the patterns mentioned in this letter is optimistic.  They are all typical of the life and death struggle in the market between bears and bulls.  The victory of bears is not guaranteed though they are winning at the moment.  New highs in the indices would make all this an unpleasant memory.  In the meantime we won’t be increasing our commitments and will be like nervous cats on a hot tin roof watching for trendlines to be broken or new highs to be made.

Congress speculates with the market…

Flags, and why the present formation in the indices is not a flag