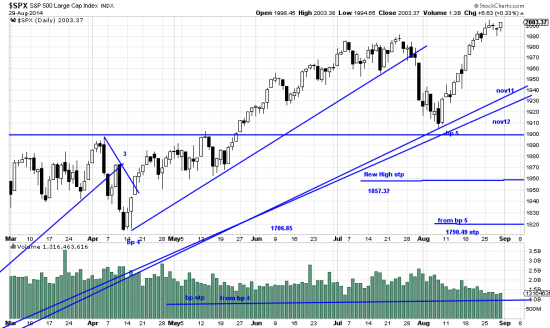 Extremely sophisticated denizens of places other than San Francisco know that the most glamourous theatre event of the city is that screamingly funny long running joke, Beach Blanket Babylon.  In our last letter we were embarrassed to find that we forgot the punchline to the joke.  A colleague of ours recently remarked that the present markets were like a beach ball –you press it down in the water and it just bobs back up.  Thus, Beach ball Babylon — We’re so tangled up in this failed exercise at humor that we’re just going to be embarrassed and hope no one will mention it again.

Instead it’s Labor Day and the shooting should start next week as the alpha traders return from the Hamptons.  They will be aided by Czar Putin and that charming guy in camaflage, the caliph of –where?  al-Baghdadi (if a drone doesn’t find him first).  These charismatic actors from Beach Blanket Baghdad will be assisted by the fact that the market is at an inflection point brought about by the piercing of SPX 2000 and the start of the NFL season, not to mention the Open.  Summer dog days are over.  Don’t work on Labor Day.

We have updated the chart to show how the nov trendlines acted as support to the beach ball.

More of the same…