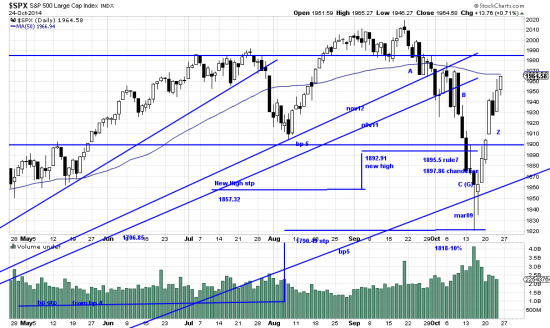 Readers, investors, traders — everybody — is (are) taking a deep breath and nervously looking over his shoulder to see if the Halloween market is gong to serve up some more tricks.  The first seven or eight days of this drama were like a boxing match — take a punch to the head which would sideline Ray Rice, then get revenge the next day, everything back to normal — but no, another punch to the head.  File this period in your mind and keep the chart.  You may be staggering around, but  you’ve lived through some historic market action.  And we are back to markets we can at least analyze.

We have annotated the recent wave operating from the premise that we are watching an alpha-beta-gamma-zeta formation (a relative of the a-b-c wave –not an Elliott wave pattern) (http://www.edwards-magee.com/ggu/alphabetazetawaves.pdf).  The A wave is the first down wave, interrupted by the B wave.  This B wave is very weak and even casts doubt on the analysis.  We would ordinarily want to see a more vigorous B wave thrusting up.  The resumption of the downwave is marked C and is of unusual violence, but its climax is unmistakable with the volume spike.  The reversal day pattern is classic– a powerful move down of great range, which provokes avid buying driving price back to the upper part of the bar.  Candlestick readers call this a hammer  or, tonkachi.  It doesn’t matter what you call it, it is a reversal signal in the majority of cases — depending on where it occcurs in the pattern.  At the end of a percipitous plunge it is reasonably dependable, and we remarked on it at the time it occurred.  Two hammers exist at the end (one supposes) of this C wave.

The Z wave is where the profit opportunity is richest.  Almost everytime this pattern occurs profit is to be harvested.  Of course it occurs right after you have had your bell rung and are still trying to recover your equilibrium.  We documented the trades in our personal accounts during this time.

At present prices are entering resistance so we may see some price stuttering here, and prices must take out the last high to assure us that the bull market is intact.  We have not quite all our S&P position back on and look for the place to add on.

More of the same…