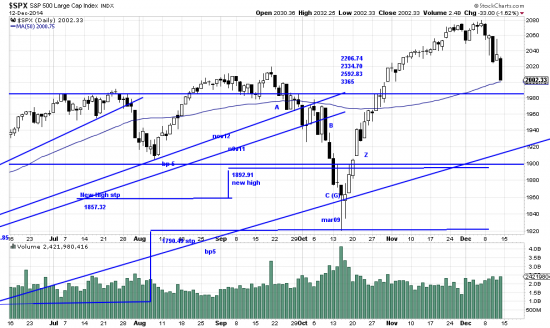 While the result is nothing rare, (an expected downwave to curb a 37+ day surge) the violence of its accomplishment was notable — sort of like a pefect storm at sea which sinks small boats at random.  ”

‘The safest road to hell is the gradual one…” wrote C.S. Lewis.  There is nothing more treacherous than the market which wreaks havoc one day, and the next day turns benign and gives back all the ground.  It lends itself to the narraative that massive investor money sits on the sidelines eager to jump in the market at the first pullback.  That was the character of the worst week in the market in years.  Extreme sell off, extreme recovery.  This happened Tuesday and Thursday.  We were moderately hedged, lifted the hedge Thursday and then put on a bigger hedge– still on at this time and probably to be increased.  Nonetheless the week was painful to equity.  Even though it is just given back profits.

At this point we expect the turmoil to continue.  We have previously discussed hedging mechanisms.  Our long view of the episode is  that  this sell off is intended to shake out as many holders as possilbe.  In fact it is shaking out some institutions also.  (And exacerbating the sell off.)  When the downwave is finished  (no prediction as to when that will be) an unusual buying opportunity should appear.

Investors always want to know why, and most of the time it doesn’t make any difference.  In this case the cause is important.  What we have going on here is the radical repricing of a major world asset:  oil.  Readers will remember what happened when the real estate market got repriced.  It would take hours to unravel all the implications of the implosion of the oil price.  Just contemplate those loans made to shale oil drillers when price was $100 a barrel and now is on its way to ?50?  40?  Pick a number which will not (or will) ruin West Texas banks which thought they understood the “oil bidniss’. 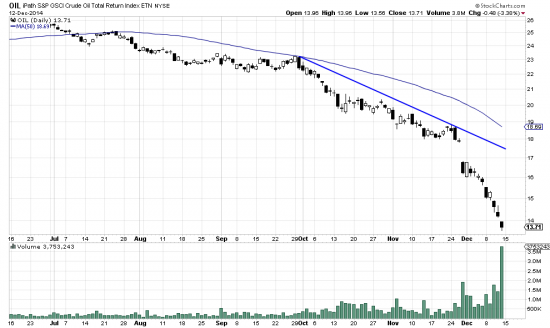 We are short OIL and looking to add on.

The power of triangles — so far…