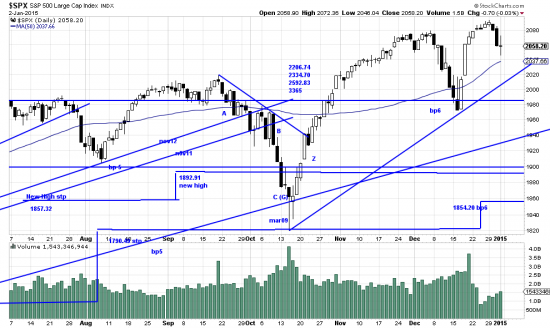 We woke up after Christmas (positing that we are now awake) to discover that Santa Claus had left a lump of coal in our stocking (illustrated above) and the fabled Santa Claus rally was a myth only believed by children and naive readers of Marketwatch.  Not only was our last piece of belief smashed, our senses were assaulted by a cacaphony of pundits, columnists, advisors, attention seekers, idiots howling like dogs about what the market is going to do next.  Of course they know from nothing and are mainly selling snake oil and trying to attract notice.

Then we suddenly realized if we could take all these voices and throw them in a pot and reduce them to their essence we might have an actual indicator for the market.  Then we woke up (assuming we are now awake) and realized that these voices had already been reduced to their essense and that the bluebird of happiness was sitting in the backyard singing of this magical indicator:  PRICE.

That’s it, folks.  That’s  the only indicator that matters.  We wish someone would keep track of all those false prophets and expose them after the fact.  We could do it, but it would be a more than full time job and we’re already too busy trying to keep track of the greased pig of price.

Our guesstimate of where that little porker is headed is already noted on the chart.  Do we stand behind it?  Of course not.  We stand somewhere near it though with the caveat that some now unknown unknown will become known and destroy all the best laid plans of mice, men and Santa Claus.  Given no known exogenous events (Putin coming out of the closet; Canadians invading Detroit; Mitch and Barak making nice; etc.)  catching fire and burning down the building we anticipate another profitable and interesting new year.

Happy same to our estimable readers.

Chaos, confusion and consternation (some our fault)