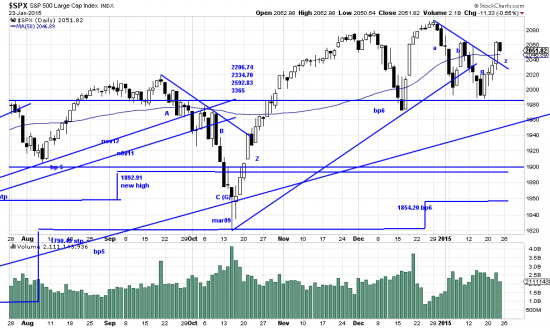 Before the howling herd raises the specter we should point out the potential head and shoulders formation here.  Shoulder; Dec;  head,Jan; right shoulder (2 of them) being formed as we speak.  Now, an antidote to head and shoulders craziness:  a formation is not complete until it is complete; and the neckline is broken.  Magee sternly warned against taking premature action as patterns formed.  One should also remember that  there was a prominent  head and shoulders in 2009 which was completely ignored by the market and functioned as a continuaton pattern.  If this were an authentic head and shoulders it would portend about a 5% correction, unless it overshot.  Wasn’t it Soros who said the market always overshoots.

That said, the market is looking very toppy and the recent volatility has been unpleasant.  We have even considered going 100% hedged until we get solid new highs for our personal accounts.  Last week’s action would certain leave a bad taste in the mouth, ending with Friday which casts into doubt the strength of the zeta wave.  Failure to make a new high in the near future will be damaging to the market.  This week should give us something to work with, and it begins badly, because the Greeks are getting ready to spoil the punch immediately.   Hellenophiles though we be (and devoted ones at that) Greece is the bad boy of Europe, having lied its way into the EU.  With the help of an American bank.  On Sunday night the futures  are looking dicey so we will probably have a nasty opening Monday.

Curse of the vampire trendline — and living dead politics