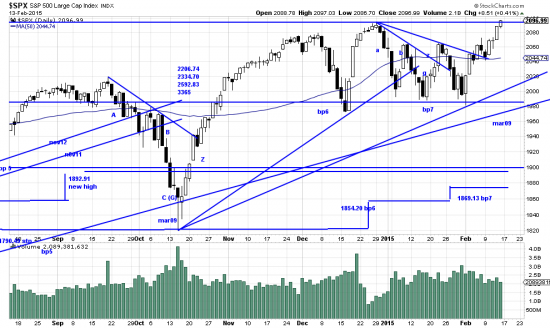 Today the SPX closed at a new high.  In Dow Theory terms this would be a confirmation.  We are a little harder on the market than Dow.  We want to see stronger confirmation.  That would be successive closes above the old top on strength.  Regardless this week has been constructive and barring a downwave here we should have a continuation of the bull market.  It is a fact that a congestion formation –as we have just experienced — can take the place of a correction or downwave.  And when it does it serves to store up energy for a surge in the previous trend direction.  Before this occurred, indicated  on the chart in October, we ran a rule of seven analysis which gave us the numbers noted there — first stop 2206.74.  Remember this is not a prediction or a forecast, but the exercise of an analytical tool.  The fact that this technique has  been accurate for the last two or three years does not validate it in this instance.  Only time will do, or not do, that.

For us this recent action has been sufficient for us to lift a significant portion of our hedge so we are largely long at this point.  We also put on a small short in gold. 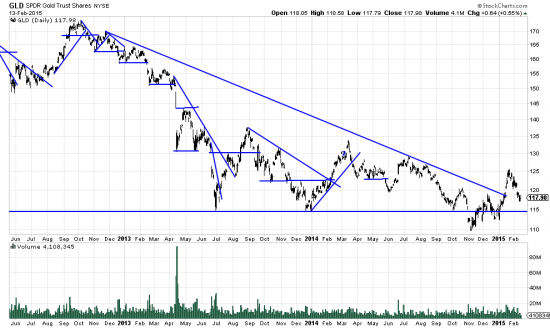 This might seem contrary to the chart which would seem to indicate a broken downtrend.  But there is a history of semi-vigorous rally attempts in the issue.  This is somethig of an aggressive play– what with Vladimir and Aristotle and Angela causing trouble in the world but we don’t think there are any teeth in the bear.  The bugs will leap on any show of life and get their hopes up but we’re betting against them.  We are also cynical about oil, but don’t have a position on there at present.  We are still short the euro, and remain euro bears.

Buying signals from the lesser triangle…