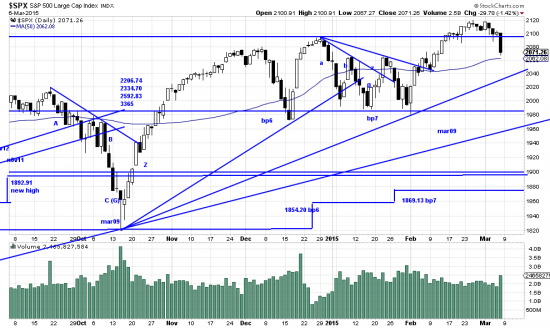 Friday the chicken littles were finally right.  A piece of the sky at last fell as the chickens rushed to get out of the way of rising interest rates.  Wha’? Wher’?  Oh just down the road.  As someone remarked after a superlative jobs report, the height of irrationality, treating really good news like world ending bad news.  But when the chicken herd heads for the exit the door gets crowded.  Hedge funds and large funds were largely blamed for a day that left the Dow bleeding at 278 down.  This is what happens when you start a snowball rolling down a hill.  Contrarian influence in the market has been powerful for months — and will continue.  Our first take on a one day phenomenon is that the purpose of is to shake out  the unwashed before the next leg up.  One day is not a lot to go on.  Shook us.  We put on a small partial hedge.

But more important events were occurring.  Of questionable import those mavens of bad timing over at Dow Jones banished ATT from the industrials and inserted Apple.  This could be a troubling indicator.  When they inserted Microsoft we marked it as a negative indicator and we were right.  But we think that even the index gurus can’t bring Apple down, and Apple will probably  bring the index up.  Of significnce, however evanescent, was the penetration by the NASDQ of its old high.  While the high has not held, the grafitti is on the wall.  And final penetration will mark a powerful new wave.

Casual news was made of, to us, more important news: 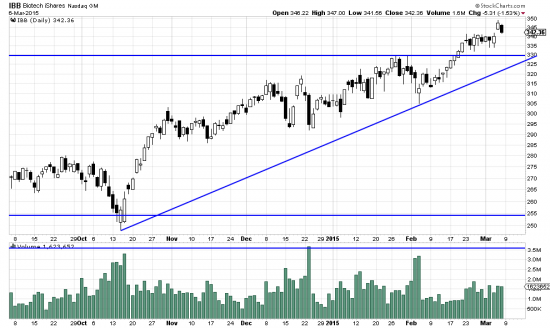 That is, the FDA has approved the first biosimilar medication as described in artlcles Saturday in the WSJ and the NYT.  They can be found online.  The technology will aid in lowering drug costs — and also result in major profit oppportunities.  We are long IBB a biotech ETF and there are several worth looking at, specifically XBI.  IBB is the largest and so far XBI is the most profitable.  Other candidates can be found at eftdb.com/type/sector/healthcare/biotechnology.  Google New York Times biosimilar for a background.

We shorted the bonds (TLT), breaking a trendline and gapping down. 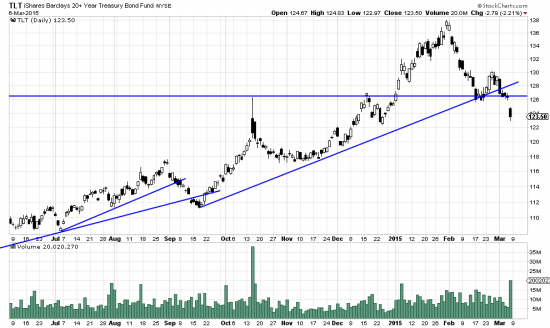 We are still short the euro and gold.

Bondage and lack of discipline…