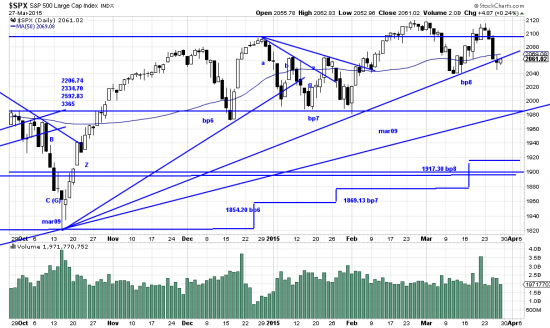 We conjectured a short while back that the wavelet up was going to pause.  The pause turned into a minor cascade.  There are — like views of Mt Fuji — a number of ways to look at this.

The present downwave could be a C (gamma) wave intent on testing the wave low at bp8.  Or it could be a normal wave in the context of the  bull market.  Either way a lower low here would be most ominous.  In this process an important trendline from October 14 has been penetrated.  At the moment the penetration is minimal.  A confirmation on strength (weakness) would set the stage for a severe downwave.

Another way to look at this episode, and its context, is as a five month coiling of the market for another thrust up.  The Dow Theory, while conflicted (because of a divergence between the Industrials and the Transports (because of a higher high in the Industrials unconfirmed by the Transports), has not generated a sell signal.  And the PnF method still has a bull target of 2380 and has not generated a sell signal.  Note the rule of seven targets we computed in October which are harmonious with the PnF target.

While the week may have been tedious it is completely characteristic of drawbacks in a major bull market.  We will have to see some clear top pattern or violation of system stops before the bull is dead.

Bondage and lack of discipline…