Caausation or correlation? As we prepare our 1000th letter some serious theoretical and operational work needs to be done on our cornerstone system – Magee’s Basing Point Method. Or perhaps just a serious audit.

The care and feeding of systems is a hotly debated topic amongst technicians – mostly these days statisticians and physicists. Subjects we understand in a general way, but far from our level of competence. And also far from our interests in building and operating a system. In point of fact it is our observation that number based systems have limited lifetimes and eventually fly apart or grind capital to hamburger meat. We prefer “natural” systems. E.g.: the turtle system, Donchian’s high-low system and Magee’s Basing Point Method.

The only system –or method– we have ever found which encompasses many epochs and conditions of the markets is Magee’s old-fashioned chart analysis (as separate from Basing Points). Many would say that this is no system at all, but a methodology. And it is true that it is not algorithmic. It is also true that the Basing Point method is near algorithmic and may be run as a near algorithmic method.

Whatever it is, some examination of the system is clearly in order. We now have two severe tests of the system: the recent test in August 2015 and August -September of 2011. Readers may look at these letters written at the time to get a feeling for conditions around market breaks.

In both incidents (’11 and ’15) prices broke the systems stop, but failed to turn into full-scale trend changes. Shortly prices recovered to the dominant trend channel. (In six months in 2011 and recovering quickly in 2015.) These events were different from the severe bear market following the 2007/8 break. In that case all of the bad things that happen in a break were realized. And the method performed beautifully, illustrating the danger and keeping us short until March of 09.

As we have often said we are always ready to go “off-system” when the situation warrants. So when we get a major trend change signal we evaluate the market and make an off-line decision as to whether to follow the system or not.

In 2011 the BP stop was violated theoretically ejecting the investor from a long held position; then the market thumbed its nose and recovered without a major downwave:

As is seen, there was a head and shoulders and the breaking of the mar09 trendline. At the time we thought that the break was a temporary phenomena. This proved to be true. One of the facts, which influenced this analysis, was the violence and speed of the move. It looked more like a climax than the start of an avalanche. This proved to be true and our essential long-term position remained intact.

As we all know from recent experience the same thing has happened recently: 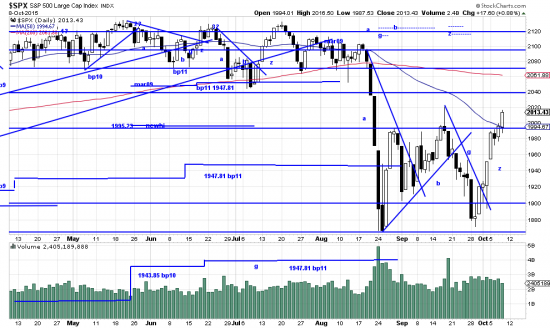 Once again we evaluated the downwave, which had some of the same characteristics as the ’11 wave. And we declined to take the stop. So far this has proved to be a profitable strategy.

100% accurate systems do not exist. So, in our opinion, continued vigilance over the operation of the system will remain a necessity.   But it is also our opinion that the system remains of irreplaceable value in the management of our long-term investments.