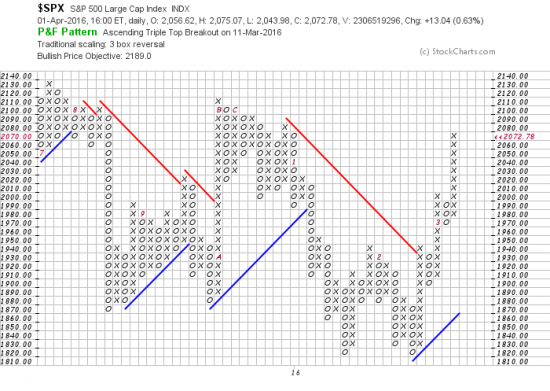 Perhaps the pressure has been too great– perhaps space weather (mass coronal expulsions) is bearing down on us — perhaps we’ve been lead poisoned by the water –perhaps it’s the general madness in the air (Paris, Bruxelles, Trump, Cruz, Bernie, Melania, Heidi, Marla, Kim, Kanye, ad infinitum)– perhaps its the 0% admissions rate at Stanford…  Who can say what snows of today will be referenced tomorrow as les neiges d’antan…?  We’re going to dive into it and plead mass coronal LSD intoxication if we turn out to be wrong (an unlikely outcome).

The PnF chart looks for a target of  2189 for the SPX.  A mere bagatelle (a kind of French pastry, as well as bagpipers of the Capbreton region).  The rule of seven which we occasionally reference

How can this be?  Or, do we really believe these targets?  Numerous times we have sworn that we are total athiests — we don’t believe anything — especially anything we read on Marketwatch and zerohedge.  This is the cold blooded application of a technical analysis tool when totally sober and unprejudiced (except for the influence of whatever it is that is driving everybody else out of their ever loving minds)  But if the world is unhinged perhaps the market will go unhinged also and under President Trump we will enjoy a golden age — or perhaps just your everyday Gotterdamerung. 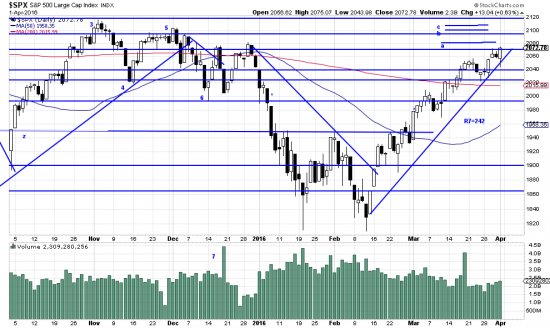 Oh, just one second.  Don’t mortgage the ranch and the Bentley yet.  Before this golden age can begin we have to make new highs as illustrated here and mentioned in an earlier letter.  We also must submit this letter to rigorous analysis to see if it makes sense in retrospect.  Even though it looks good at the moment.

Had enough already? Say uncle or we’ll hit you again.

More than one market — lots of them