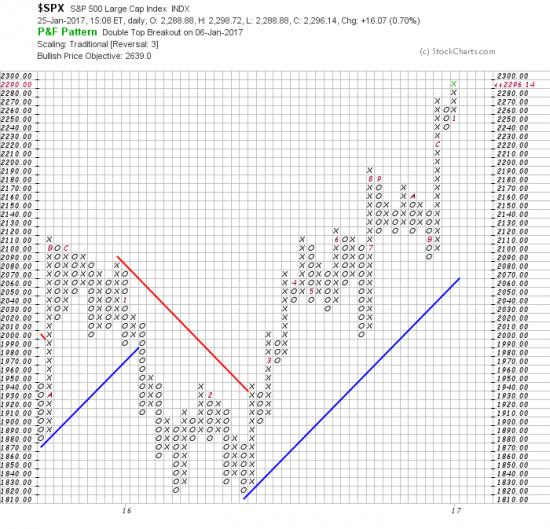 We wrote a letter a few days ago — don’t wory you didn’t see it becuse we didn’t send it.  The title may tell you why:  “If there’s nothing to say, don’t say it.”  In short market action was so boring that there was nothing to say, so after admitting this we just shelved the letter.  Which is replaced by some big news — the Dow cracked 20000 — and not only that, it did it in the shortest time period in history.  There may be something to worry about there — but more of that later.  Here is the chart of that:

19000 was topped in Nov 2016.  The chart here is begging for a correction, but in honor of the milestone we scaaled into some more of the SPX (in UPRO).  While a correction is clearly in the cards (but only the Great Juju knows when) the bullish signs are  impossible to ignore.  The PnF chart above of the SPX looks for a target of  2639.  Does that strike you as fanciful?  Well perhaps not so.

We attribute this market condition –rampant bull market — to the extended base and energy which has been built up since Oct 2014, when the congestion began.

We are not Satoshi Nakamoto. The bull is loose…