You have to have a pretty long memory to remember the Pogo for President riots in Cambridge Mass during the halcyon days of politics as an honorable profession.  Enough of that.  Now you can make laws about drug companies and bet on them before lunch and everyone just thinks it’s whoring as usual.  And you thought Nigeria was corrupt…

The Nigerian’s aren’t to blame for the pogo stick like markets –that’s Congress and the politicians.  When Trump was elected investors were so elated at the prospect that something would get done in Washington that they rushed out and placed their bets. (After all if you have all the levers of power you can enact beneficial programs –can’t you?)  So much for that idea.  The prospect of  a rational tax structure and trillions in infrastructure spending– get the cash sacks ready.  But you own the levers of power and you can’t even figure out which way your aircraft carriers are sailing  — uh-oh, hop on that pogo stick.

This is not difficult to figure out for a technician.  The market is stuck and drifting sideways.  (Chart might look like three peaks and a rugby scrum but that doesn’t get you an investment strategy), and only traders of questionable virtue  make money in pogo markets.  (Make the law about drug stocks and call your broker.  Don’t worry about insider trading laws.  Those are for the “little people”.)

For the technician there is a strategy:  Define the borders of the pattern and stand aside.  When prices break out throw the pogo stick away and start betting.  Unfortunately this process is muddied by Chicken Little and Cape Avenger and three houses and a dome and etc. etc. etc. (the dreaded “etc.”  pattern.  So what are the real facts?

Real facts:  The SPX is in a gentle 7 week downtrend of less than 4% magnitude.  The Great Bull Market is not over and won’t be over until the last Major Basing Point is taken out and Armageddon is proclaimed.  War will be bullish — except for those in it. 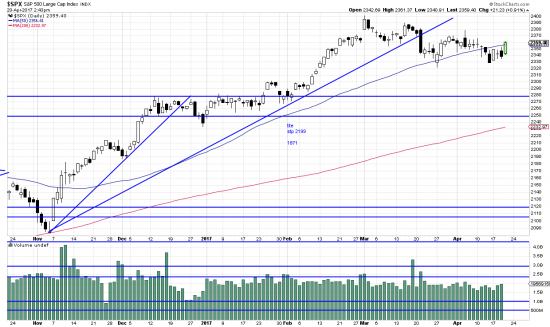 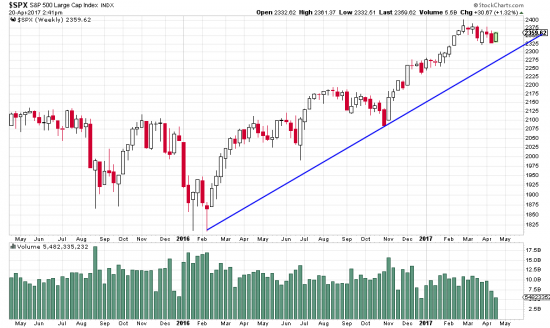 A weekly chart showing the present situation.  Breaking the trendline would be a negative sign.