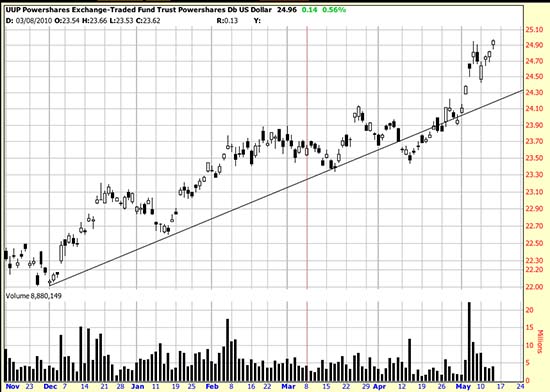 UUP — as we have previously noted is the long side of the euro trade, although other currencies are involved.  We have pretty much been long for months, and it probably a more conservative way to trade the euro, but nevertheless the system is still short the euro.  Short the euro, or long the UUP and long gold are pretty much the prettiest pictures right now as the market staggers away from the abyss.

The indices are doing as we expected — an automatic bounce from the Thursday bungee jump and today another three digit day.  The market is still reeling like a drunk on St Patrick’s day.  And will remain very nervous until the recent high is taken out.  there may be some more downside here but readers should be comfortable with the stops.  At this point if the stops were taken out we would want to reverse and go short, because a major trend change would be indicated.

But we think the market has discounted most of the toxic news.  It is just now in the process of digesting the defense of Greece and the euro and it may need an alka seltzer.

Instead of an alka seltzer readers might want to take another hit of gold.  Except this particular moment is not the moment to be buying.  In fact a downwave is due here.  Once again the best thing to do is just sit through it.  There is no indication that the gold bull market is done.  And as long as the Europeans are trying to get their fiscal house in order it’s a fun trade.  Teetering on the edge right now, but fun. 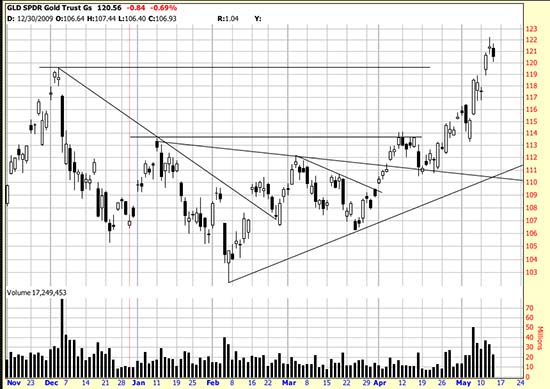 Very steep slope, and Wednesday looked a lot like a reversal day.  Traders might be watching the intraday data, but for long term investors it’s just under the radar.