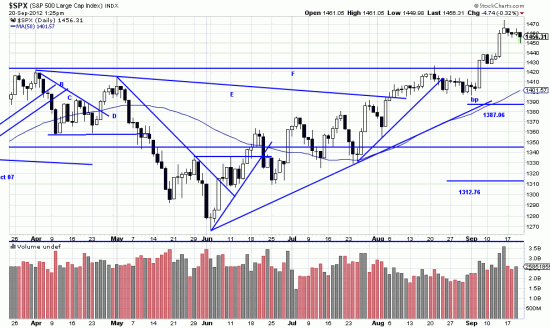 While the world waits breathlessly for the inevitable “correction” it’s worth figuring out where stops should be prudently set.  We think the likelihood of a seriously painful downwave are between none and zero.  But the odds of a minor 5% downwave are pretty high.  Knowing what to do before the shooting starts leaves you sitting in the catbird seat as opposed to investors who watch the avalanche start and wind up frozen.

So we calculated on the SPX some systems stops.  Interestingly the Basing Point stop in force since April has been supplanted by the September low of 1396.  The stop from that point, using a 6% filter, is 1312.76.  That is the true and conservative trendfollowing stop.

For aggressive investors who are willing to risk being picked off there is a stop calculated from the low the new high at 1460.  This stop is 1387.06.  As a reminder stops unless otherwise noted are SCO, stop close only.  These stops are more general than just for the SPX, biut apply to the market in aggregate.  Violation, especially of the basing point stop would warn of  an extremely serious downtrend and cause reevaluation of all positions.

Back in June at the lows of that downwa e we canceled the system stop of 1289 because our assessment of the wave and of market conditions told us that the wave was ending.  It’s like the pilot says to the autopilot, I’ll take over now, take a nap.  That turned out to be the right thing to do, and still systems are necessary so that judgment may be supplemented and guided.  So, given that a downwave is due anytime readers should be prepared for some equity erosion.  That patience will be amply rewarded as it appears to us, (reluctant forecasters always) that the market will blow out the resistance and rocket to new highs.

In the cathedral the priest picks out a member of the congregation, Mr Higgs Boson and asks him to leave as he is in violation of the Vatican’s policy that the earth is the center of the universe and other physics questions.  “But you can’t do that,”  complains Mr H.B.  “You can’t have mass without me.”