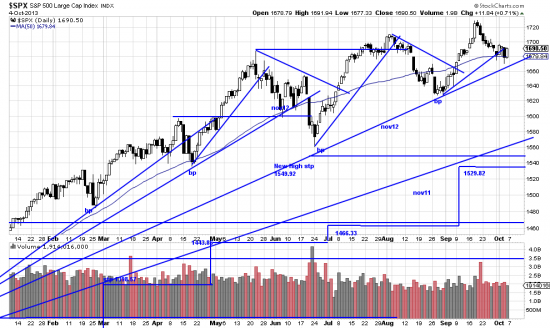 Human foolishness.    We have the edge in that category.  Well maybe not with Shiite zealots trying to burn down the country in Washington.  The WSJ, that bastion of liberal interpretation, thinks the market doesn’t care about the shutdown.  That’s what Murdoch would like for us to believe.  But the market is like a herd of very spooky cattle.  One lightening bolt and they’ll be rambling across the Rio Grande headed south to Patagonia.  But we won’t be going with them.  We have stops.

In the chart above a short trendline is broken.  The trendline is technically insignificant and questionable anyway — just a feeble attempt to put some order to a situation where there is no true trendline (because there is no pull back of significant depth).  A greater danger is lurking in the nov12 trendline.  But we think, in the present fraught circumstances, that a penetration of this line must be judged by the Magee 3% rule.  That is, a penetration is not valid until prices are 3% beneath the line.  That is because contrarians will hop on the bandwagon and try to start a stampede.  On the contrary, when the kabuki theater is finished in Washington We will be going ALL IN.   Boatloads of money is waiting eagerly for the first positive sign and the stampede will be headed for the Canadian border (are those guys still shipping full flush toilets across the border?) (And can’t something be done about it?  South Park advocated bombing them.  If so we should start with the ones with the bad French accents.)  zut, alors.

We have, like Cassandra, observed that there is a massive top in the bonds and even made a little money off a short we put on in May.  We were spooked out of it (cf. human foolishness).  We have put the short back on.  What?  Where’s the signal you say.  This is what we call a no-signal trade.

You would ordinarily  expect a long trade here with the breaking of the downtrend line, but our economic and fundamental analysis says bonds are doomed.  So we are once again short bonds. (with TBT)    We’ll stop it 1% above the nearest high.