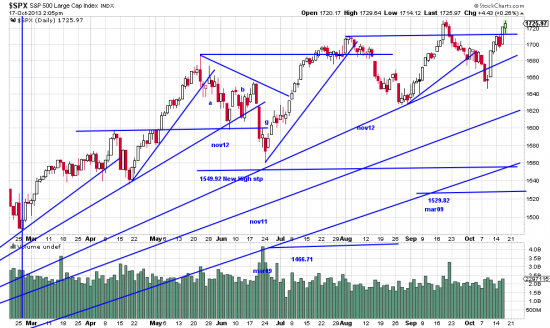 Reeling with a head splitting hangover from the excesses of the last two weeks we solemnly swear off tea and swear — never another drop.  The market was surprisingly benign — especially considering the cataclysmic consequences of a US default.  Just stumbling drunkenly near the precipice will cost the Treasury (that’s us folks) billions of dollars.  The Chinese have already downgraded our bonds.

And like drunks who are euphoric at having not gone over Niagara Falls the market celebrated a near death experience.  By shooting prices out of a canon. Here is the technical implication of this.  We previously speculated that we would have an apha-beta-gamma pattern here.  That may turn out to be a V.  Quite possible considering  the unusual circumstances on the political front.  If so a new high is a buy signal.  Worth pointing out that this is a long term signal.  There may well be a pullback as there often is after a breakout.

Given the unusual circumstances gold had a nervous reflex reaction: 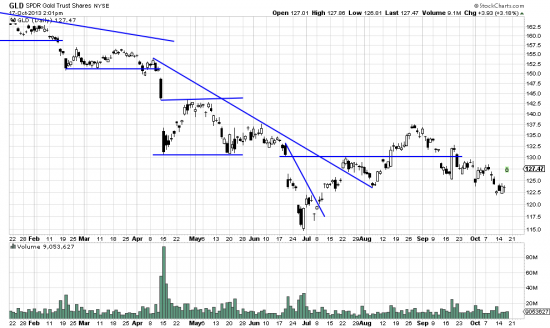 Up 3.14% on a gap. Enough to chase us from our short.  We don’t stick around after events like this.  Emphasize:  This is a trading tactic.  A trend trade would have a stop above the near high.  We still think gold is on a downttrend and will reenter according to the chart.

A power bar and a gap.  Adios.  We still think bonds are headed for the cellar with gold, but we’re happy to be watching for the moment.

The reaction to events in Washington was so fast and so violent that it is unlikely average investors were able to board the rocket.  Regard then:  If you sat out the b.s. you were already long as we were in most of our accounts.    In the long term the HF traders and the liars and cheaters disappear and the  long term investors go to the bank (passing a few traders luxuriating in the gutter on the way.)

A major crash waiting to happen????

Air pockets and instant recoveries… and a secret Magee oscillator…