We continue to heap scorn and contumely on Twitter (and Wall Street).  The IPO is a fraud and a scam on the public — which doesn’t seem to care.  A pig in a poke.  A bagfull of sheiss.  This is reminiscent of the frauds perpetrated on the public in 1999 when valuations were established by the number of eyeballs viewing a site.  Speaking of ninja loans.  And, if you are agile you might make some money on it.  We may short it if the fools run the price way up.  We have been kicking ourselves for not shorting Facebook, for example.  But here we have a better way to do it.  The ETF FPX which buys IPOs and follows them for long enough to see if they have value.  A much more conservative way to do it — unless you’re a shooter.  And if you are we tip our hat to you.  We’ve been there  and we love to gamble — but only at games that we can win.

Bonds is one we can win.  We shorted TLT.  The chart is so ominous that you might fear for the economy.  A 22-24 month top waiting to fall like an avalanche: 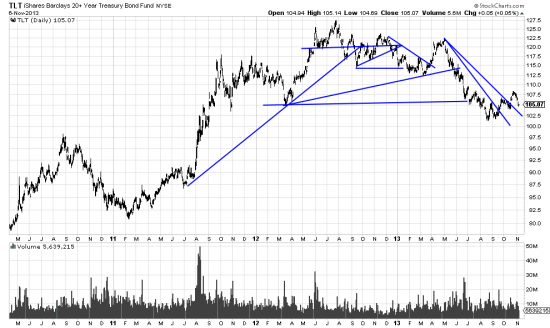 You might think the broken downtrend lines would indicate a long trade, but we see the weight against it.  We think this thing is going to melt like a glacier –slowly.

Another way to play IPOs is with the ETF IPO– newer but worth a look.

We will shortly explore the general market conditions and the increasing evidence of froth as well as market top chatter.  Watch this space.

Still in the frying pan…

Stops. What it’s all about.