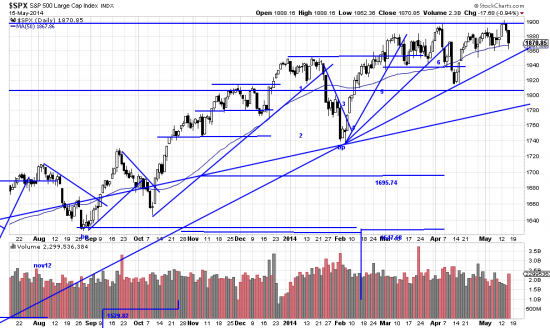 Barely had the SPX made a record high when contrarians jumped on the vulnerable issue and smacked the hell out of it.  Vulnerable because the high was made on weak volume as may be seen here.  The high appeared to be a breakout, and we remarked at the time that we had no confidence in it and declined to add on to our position which we often do at new highs.  Now contrarians have taken the market down pretty hard.

But really nothing has happened here (if the market falls over Niagara we’ll certainly change our analysis.)  We think the market is stuck in the congestion zone — or broadening rectangle.  As you will see comparing to the recent chart we have raised the upper boundary of this formation.  Seeing this the last few days make more sense — the upper line is a line in the sand that bears have drawn and they will defend it.  The lower line is the bull’s line and so far they will defend it.

What we have here is extreme uncertainty and lots of  free floating anxiety causing a  retreat to Treasuries.  We sit and watch patiently.

The art and science of top analysis