A weekly chart of the S&P to lend context.  A bull market interrupted by two sell-offs.  Clearly manageable with a simple trendline.  Now in recovery with a new high just made.  Withal, the market not manifesting much enthusiasm and–just a short time until Brexit happens, or doesn’t happen and continual uncertainty on the investigations in Washington.  But the market seems to shrug off developments in that political situation as though it doesn’t care about rats, witches or blatant tax fraud.  We think that when the Trump  investigation breaks we will see all the volatility that didn’t happen in this phase of the markets.

So what is one to do? 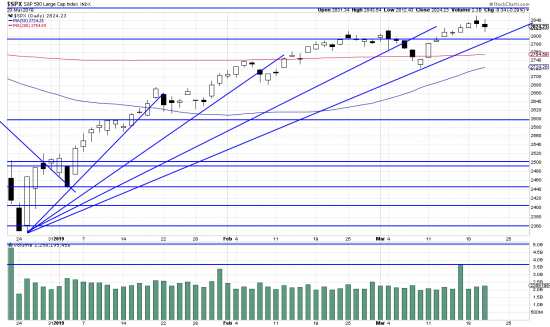 There is only one answer to this question: Do what the chart says.  The chart tells you whether to be long or short or out.  In this case a new high within the recovery has been made — good practice says then that the investor should be long.  The attainment of this point comes reluctantly — allowing one to determine how much risk is likely, and one may thus adjust his (er) position to fit the situation.  The stronger the movement the bigger the bet. As we have described many times this would be one tranche of a position that might have three to five tranches — or even more.

We have been carrying a very small position in UPRO and we will be increasing it.

The trend stop is under  the recent low, but one might well use a money managment stop, that is, 5 to 8% under the present price.

An unmemorable week for Memorial Day.

A note for technocrat neos

Earthquake. More than one earthquake…