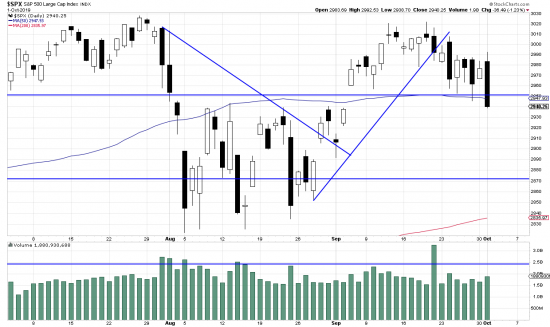 The rectangle that formed in August offered an obvious interpretation (uncertainty and contest) — and the breakout in early September appeared a clear buying invitation. Now the breakout wave has turned down and prices are right on the edge of support.  Extensive penetration here would cancel the signal created by the breakout.  Remember the first rule of trends– that the present trend tends to continue.

The dominant trend is still a long term bull but the intermediate trend is sideways and highly subject to news –real and fake. This means getting nickeled and dimed in short term turbulence.

Annoying enough for us to pare back already small positions which we had increased on the breakout.  We are never reluctant to abandon positions, knowing that it’s as easy to get back in as it is easy to exit, but paper losses can turn into the loss of real capital.  We think savvy investors are waiting for strong signals from the market — as in making new highs.  In the meantime their positions are slim enough to occasion only moderate annoyance by the volatility.

Chasing the dog days with shorts…