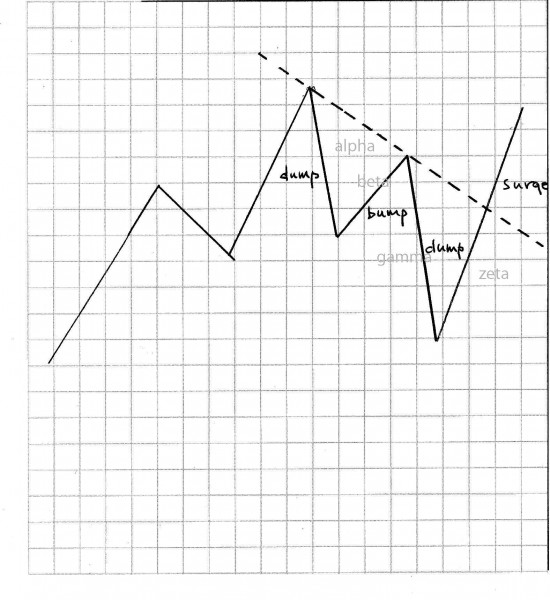 We got tired of writing dump-bump-dump… and so we have renamed our little pattern the alpha-beta-gamma–zeta pattern, or abg-z.

It has particular resonance right now because it applies to two issues of importance in the market: Houses and silver.  We have been warning for some time that housing was in a b wave (whether from the abg pattern or from Elliott Wave or from totally arbitrary analyst naming stuff to promote themselves –a terrible problem because we no longer have enough time to go around smashing cups and saucers or wine pitchers or other nomenclature invented this morning).  Now in the WSJ (and others) we learn that housing is down 57 months — In the interim speculators and vultures rushed in to push prices up into a bump or beta for awhile, as we were saying, don’t do it, don’t do it (as were saying at the top of the real estate market back in 05.  So. just don’t do it, as Nike would say.)

Silver appears to have had just three days of beta.

Naturally we ignored our own analysis and put on the first unit of a position (which we took off today –we may be impatient, but we’re not stupid).  Anyway we owe silver so much money that we felt like giving some back –and they took it.  Now smart traders and investors (which group we hope to join someday) will wait for the abg-z pattern to play out.

The market took a hit — no big deal in the pattern, but indicative of the continuing unsettled nature of things.

Sometimes it’s hard to think for Grantham howling sell on one side and another whole group howling S&P 1475 on the other.  Our readers, who are smarter than we are, know that the chart will tell us what to do, and, ourselves, humble sitters on the oracle’s tripod at Delphi will utter meaningful interpretations.  But anything we’ve done couldn’t be as dumb as what Microsoft just did.  Bought Skype???

We understand there is a rationale to it — namely that they had piles of cash sitting off shore they couldn’t bring home because the k-12 schoolkids would have got some of it.  So they did like we do when we’re at the airport in Madrid with a pocketful of three pounds of euros — spend it on candy and liquor and perfume and lingerie and magazines.  Frankly MSFT doesn’t look really smart, and hasn’t for some time.

They did really well by knocking off Apple’s ideas to create Windows and giving away free browsers to knock off Netscape.  Ah-hah, that’s it.  They’re going to put the phone companies out of business by giving away phone calls!  It would be a delicious irony if Apple wound up owning the PC market and Microsoft just hung on to a sliver of the business.  Every time we crank up our Windows PC we wind up wanting to hurl it through the window.

Readers are probably ready to hurl us through a window (7) now, so we’ll end by pointing out the obvious — nasty crosscurrents and uncertainty.  Don’t sweat it.  Just put your stops in and download Skype while it’s still free.

Bears maul market — or is it bears?