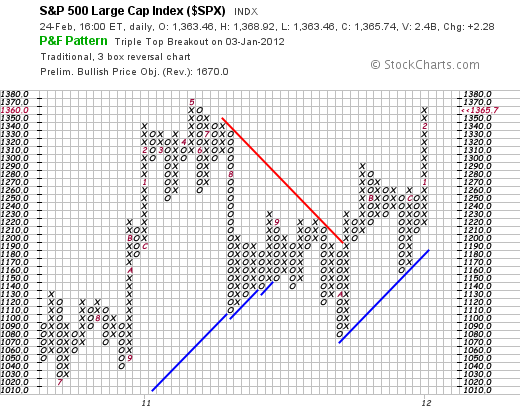 We delight in debunking rash forecasts and talking heads.  But its hard to argue with a computer — in this case the Stockcharts.com computer using generally accepted algorithms to analyze a PnF chart.  The analysis predicts a target of 1670 for the S&P.

Barron’s 15000 (maybe 17000) and our own January calculations (a nervous tic of ours — when waves get overlong we start twiddling our thumbs by running PnF charts and using arcane algorithms to analyze markets.  Like being a lexicographer by Dr Johnson’s measure — a harmless drudge.

Here’s the link to look at our noodling back before this wave got overlong.

We opined then that in a Wyckoff analysis 1860 might be a feasible target.  That was supported by our application of the Rule of 7 which computed some targets for waves — 1456, 1582 and 1837.

We have made it clear we don’t stand behind these calculations.  We just run the numbers and are bemused by the results.  But that’s better than Barron’s.  They actually believe what they publish.  There is  of course a severe problem here (as Mitt would say) which is:  the last thing you want to do is look for evidence to support your position.  That way lies madness (also bankruptcy).

So we reiterate the central philosophical premise of our practice: Be here now (as Ram Dass said).  If these fanciful scenarios are realized we will be there, but we will not be there for  disasters which occur on the way.

Regardless of forecasts, predictions whatever it looks  like bull market weather.

Buy! Buy! Buy! Well, enough of hype, but in fact there is a Dow buy signal today

Platinum — as in blondes and exhausts