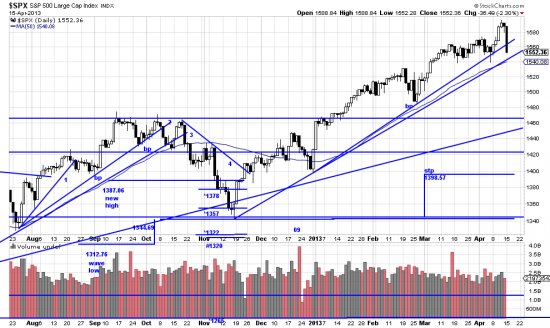 The bear attack (the REAL bear attack) we have been talking about for a week or so started on the opening today and drew blood all day long.  Much like the terrorist attack on the Boston marathon.  The reasons were trumped up of course, but once the herd stampeded it was so long little dogies.  We partially hedged into this mess by buying SPXU, the short of the SPX.  The tight trendline from December 31 is broken which probably means more downside to come.  And the trendline from November is within a whisker of  prices.  That would pose a bigger problem.  We consider the likelihood of prices reaching our Basing Point stop between slim and none.  We look on this as a potential buying opportunity, and will inform you when the time to do that is at hand.

As we noted last week we were already short the metals.  We will post a letter shortly analyzing that trade.  We put on another unit in that trade, basically doubling the bet today. A look at why is in the following charts. 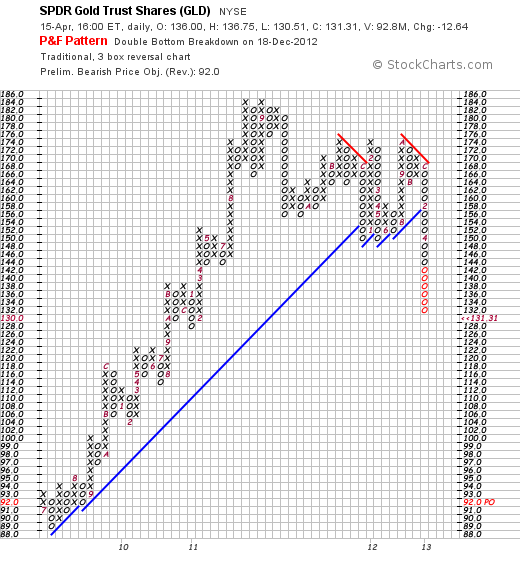 The PnF system thinks gold is going to 92 on the ETF.  Given the extremes that occur in these markets it is not impossible.  At any rate to be up 10% in two days is a nice start to a trade. 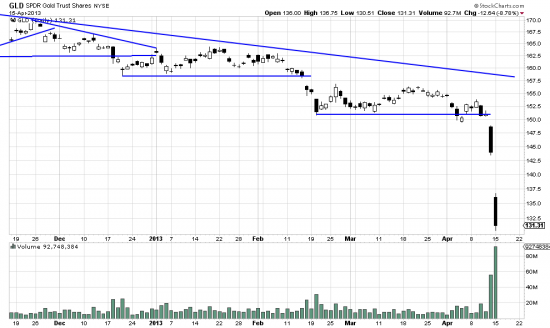 Friday’s gap and power bar, and power volume, were screaming signals to us to get short.  We had been short, but didn’t like the action in mid February so closed the trade.

Now let us talk of teleology — (just laying a little Aristotle on you to send you to your dictionaries).  Teleology has to do with the ultimate purpose of things.  The ultimate purpose of this down wave (or waterfall) is to set the stage for a major wave up.  If you look at major upwaves you often see (and minor upwaves too) a stomach churning downdraft before the rocket takes off.  This is to chase the unwashed and the undeserving from the market.  The market knows that they will return towards the top of wave to furnish the euphoria necessary to end the party.  We have been warning of the imminent bear attack for some time, so readers should be emotionally prepared for what should be a minor downwave.

The comments on gold (GLD) apply to Silver (SLV) also.  We are short both, with GLL and ZSL.

The apple has come home to roost.