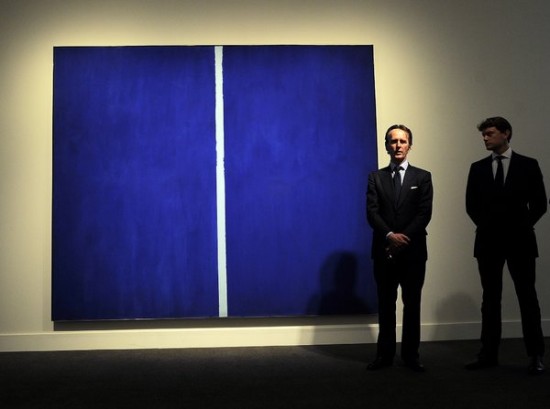 This picture was published in the WSJ noting the sale of this immortal piece of art (Barret Newman) for $42M.  In the Journal, in black and white it was just two black blobs.  Here we see it better and realize it is two blue blobs.  What it means for market analysis is that froth and foolishness is entering the market.  This is good.  The more the merrier.  In addition farmland prices are going out of sight.  These are all signs of froth in the economy.  Somebody ought to tell those 12.3 M unemployed people to stay out of sight, lest they spoil the party by looking ragged and hungry.  Oh well Congress is on the case, working hard — having passed 30 bills on abortion and repealed Obama care at least five times.  We once suggested that all the seats in Congress should be electrified (like the border fence) and constituents should be able to vote to give their representatives the hot seat, and when that vote reached 50% plus one the Congressman would be turned into a crispy critter.  But we digress.

Froth or no (and the market will tell us when to take the money of those new partyers and run) the market looks to be in the clear.  We have remarked, or noted, that when new highs are made there is no resistance point overhead.  Everybody is profitable.  There will be a reaction from the contrarians when they can work up a crowd, but right now we should appreciate in a sober and serious way the fact that we have sailed through some nasty waters and deserve accumulating profits.

For our part, we added on to our short positions in gold and silver and the TLT and bought a little QLD.  Herewith, charts:

Silver looks just like this, except it has already broken the horizontal line, a contributing factor in our decision to add on.

We have been saying for months that the bonds were about to enter into bondage and be disciplined.  We don’t really know if this is the beginning (of the beginning, or of the end or the middle or… well, you understand) — whatever, we’re short with TBT. 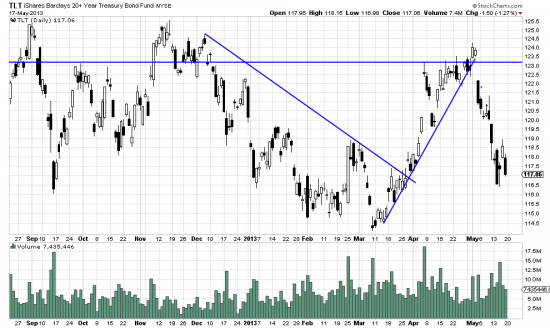 The market in general is kicking up its heels (or hoofs) and repaying our patience — as well it should. 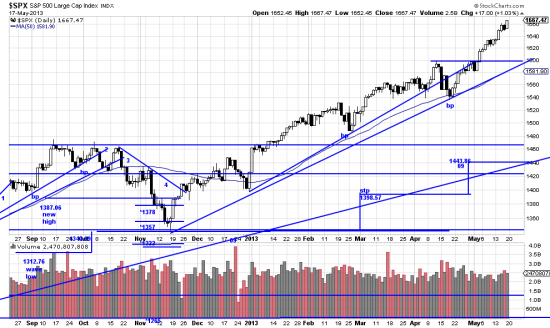 Don’t go to sleep.  As someone said the market  will do whatever it can to cause the most pain to the most people.  Long term trend following is the best palliative for this.

It’s not over till it’s over…