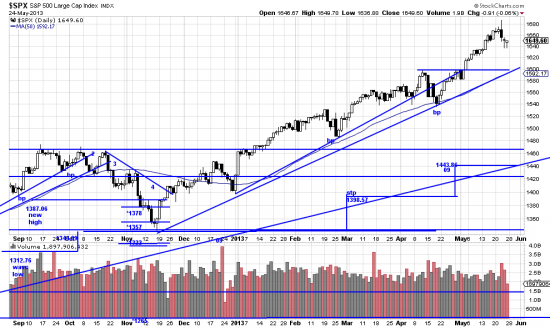 It might seem strange to regard the week as not much — especially when the SPX transversed 38 points on Wednesday and the Nikkei took a 6% dive.  How can this be?  Easy.  Same as any sea going voyage (in the Bermuda triangle) good weather for weeks then one little old Mass Coronal Explosion and a couple of sun spots and cometh the squalls.  If they don’t sink you you’re basically all right, and it looks like we’re all right.  Check in a few days to see if we sprung (spranged?) any leaks.

We joke — as in he who ne’er felt a wound–but we take days like Wednesday seriously.  We hedged during the day — but were out of it next day.  Such days often are warnings of worse weather to come.  And we will in all probability see some erosion here, but that is a good thing.  Contrarians were begining to breathe hard and slaver.  But trend followers have a way of dealing with squalls — they discount them as market efforts to dislodge weak hands.

Japanese stocks on the other hand were in a parabolic rise (we pointed out back in March that Japanese stocks were  breaking out), and what goes parabolic must return to earth.    Interestingly, the trendline is intact in EWJ:

This is pretty surprising and might make EWJ a buy.  We think Japan is on the right economic path.  But if we buy it we will have a tight stop.  2% under that line and it’s sayonara, lotus blossom.  Sayonara is Japanese for adios.  Speculative.

Heads up. Head and shoulders? Does it matter?