Never thought we’d miss Greenspan.  But a little more ambiguity wouldn’t be a bad idea.  Nevertheless the market recovered from its hissy fit over Yellen’s unguarded comment that we might be  six months off from going off the sauce.  We’d prefer that they just do it and tell us later.  Plain statements  give the hair trigger  traders an excuse to panic the market as it did for awhile Wednesday.  But for calmer days Thursday and Friday this might have altered the pattern.  Nonetheless Friday a higher high was made in the SPX (thinner than a Paris model seen from the side).  That is important.  But basically we have a drifting market.

There are certainly signs of speculative excess — particularly in the IPO market where perspective has been lost and questionable companies (and their Wall Street sponsors) reach for billion dollar valuations.  We think these deals are being bought by greedy insiders and naive  uninformed investors.  Guess who is getting the better price.  The insiders get the pre-ipo prices and the public gets stuck.  Shades of 1999-2000.  This air of sans souci doesn’t seem to be infecting the general market at the moment.  We have several times sneered at the IPO market and its carnival of hustlers and marks.  There is a way to deal with it through an ETF — FPX.  This may be a rational way.

There is no present signal in the issue.  (We sometimes make what we call a no-signal trade.) But stops are shown for those who want to take a flyer.  The conservative stop at 40.82 is expensive so an alternative is shown at 44.54.  This ETF will work until IPO madness exhausts itself.  Buying anything right now seems like a stretch.  In fact we abandoned several trades:  JO, GLD, GDX  and SLV. 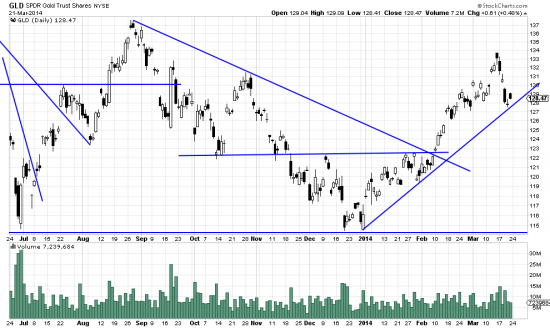 The upgap here looks like an exhaustion gap.  Frequently a gap of this type occurs at the end of a wave —  in this case closed by two more downgaps.  This is a trade, not a trend investment strategy.  It could well be that there is a double bottom here, and gold may have entered an uptrend.  We can always rejoin it.  But the market won’t refund us any money we lose on the trade.  The trend stop is 120.79.

On the weekend we will post a letter rethinking gold and the market in general.  Don’t overindulge in basketball.