Dennis Gartman, a prominent analyst, is reported by Marketwatch to be fleeing the market, provoked in part by the unsettling market action Friday.  He described his observation as like watching someone flip a switch.  Ourselves, watching Friday, felt like we were watching a snow avalanche.  While it did not feel exactly like 1987 (in which we made a killing) it was disquieting.  The continuation Monday also caused some equity pain, and some analytical discomfort.

In a word, some big money has gone to cash.  Hedge funds and private money are reported to have had bad experience over the past year or so, and investors are questioning why they should pay high management rates when the index ETFs are outperforming managers. Paul Tudor Jones is closing a fund, Pimco has suffered monster outflows.  The market is in rough water.  And the management business is in rough water.  We have in the past described these hedge funds as a compensation scheme disguised as an investment strategy.

While these straws are flying about in the wind the market is in a death struggle with short term traders and contrarians.  Friday is only the latest skirmish.  While this is taking place on the daily battlefield it is causing the formation of some technical structures which are of interest, if not concern.  Recently some analysts have barked at the moon saying that the NASDAQ ($COMPQ) was developing a rounding top.  A faulty analysis.  What they should be looking at is the possibility of a double top in the Industrials.

While this is ominous it is hardly complete and only a defective trader would rush to an analysis which caused a trade.  At the same time an excursion through the horizontal line would not only complete the top pattern but trigger long term trendlines from as far away as 03.  This would not be a happy event.  At the moment we think this extremely unlikely. Unlikely, but Friday and Monday caused us to buy some SPXU (bear SPX, leveraged).  Today we closed part of it.  Dancing along the razor’s edge has always seemed fun to us.  Reminiscent of an event in our past when, along with Mike Merrill (Drexel Burnham SF manager)  we were hammered in the markets and Mike said  would you do it again?  And then answered his own question:  Once a Wallenda, always a Wallenda.

As always readers are better off taking the long view and not losing money on hedges.  If, and when, we think readers should hedge or sell we will be shouting at the top of our lungs.

By way of perspective, the days which sent Gartman to the sidelines and made us uncomfortable brought the SPX down less than 3%.  Because of the congestion zone a short term trendline formed at 6 which may require some payment being broken by Monday’s action. 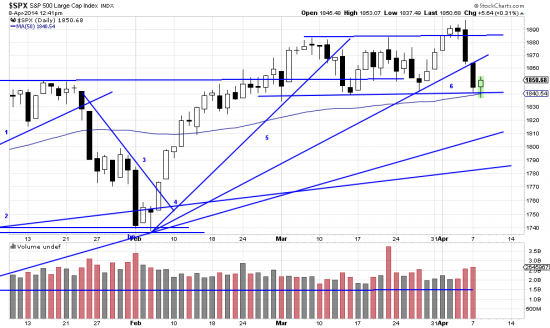 Looked at in retrospect it loses some of its horror movie immediacy.    But the warnings are there.  Time to stockpile cash.  Maybe you’ll have to buy higher, but if lower occurs you’ll have some ammunition.

We remain convinced (for the moment) that a short correction is due before the election — to be followed by a roaring bull market extension.

Gotcha markets. As Keynes would say…