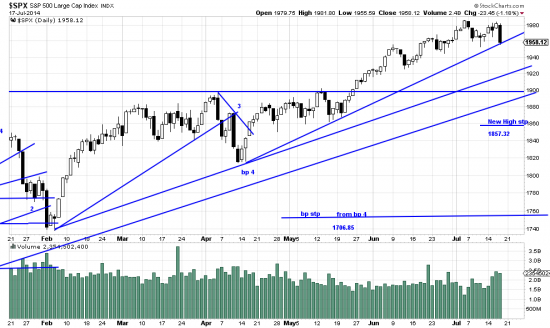 Traders have been nervously  circling the chairs eyeing other traders in an effort to be first to grab a chair when the music stopped.  The music stopped with a bang when Russian separatists in Ukraine shot down a commercial airliner with 295 people on board. Traders are hair trigger creatures.   They shoot first and ask questions afterwards.  They bailed out of stocks and into gold and bonds.

To us this tragedy (and criminal act) is obviously a transient phenomena.  It is unbelievable that Putin would do something like this as “revenge” for sanctions as he has muttered.  Of course he is responsible for the state of tension in the region as he redraws national borders to suit his domestic political needs.  But  after some snarling the Russian bear will retreat to  his lair and plot further minor mischief.

The question is will the Russian bear provoke the stock market bear.  He has certainly struck the market at a very vulnerable moment.  As a result of today’s action price rests on the short term trendline from April (as shown).  Definitive penetration of this trendline puts the nov12 trendline in danger.  The April trendline  while it might be annoying  is nothing to the nov12 trendline which would rattle the cupboards and severely pain portfolios.  That trendline is only 50 points away.

We have computed a New High stop (1857.32) since the wave low Basing Point stop is approximately in Patagonia  (1706.85).  As always these stops apply to the other markets as well — that is their violation may well indicate a general downtrend and all stops should be looked to.  If you have questions please email us:  bassetti@edwards-magee.com.

If the April line is broken we will begin hedging –scaling in — in our personal accounts.  But we tend to look on this as a buying opportunity rather than the threat of a trend change.  Get ready.