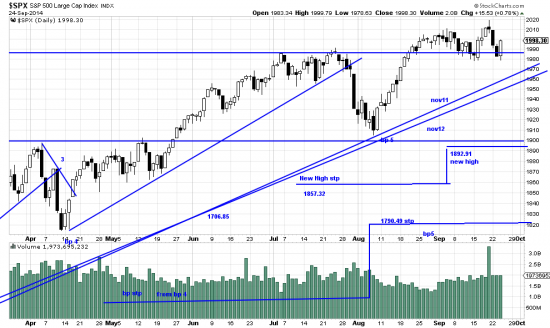 We have often remarked on the tendency of the market to sell off before starting an advance — like a quarterback throwing a head fake at defensive backs to send them in the wrong direction.  Sometimes this is called the speacialist fake, as specialists (when they were more important) threw traders off  by sending the market in  the opposite direction from their final intention.  Whether the last three down days were an instance of this or not we haven’t decided.  But today’s action was what technicians call a key reversal day — a lower low and a higher close.  With today being, in addition, a power bar.  This should mark the end of the little downwavelet.  Although the three down days amounted to less than 2% such days can set your teeth on edge because that’s the way avalanches start.

Actually it may be the way avalanches start, but in general it’s not the way markets top.  Markets ending a long bull market usually grind back and forth as the public steps up to buy cheap(er) shares and the smart money smoothly distributes the shares they need.  More on this topic later.

If it means anything gold is not acting like a safe haven:

WE have previously pointed out the apparent double bottom easily seen here.  The formation has not reversed the bear market in gold.  Now  gold is approaching what should be considerable support.  If the low of the double bottom is taken out there should be  a real bear market.  We have chosen to participate in this by shorting silver which has a more bearish chart.  If gold breaks support we will add a gold short.

Stop right there. Don’t make any fast moves…(faster than a millisecond)…