In the news, Calpers dumps its hedge fund investments.  Reason, expensive and underperforming.  A witty c0lleague of ours (lamentably we’ve buried his name –we always like to give credit) remarked that hedge funds were a compemsation scheme disguised as an investment strategy, and that appears to be true.  Take away the front running and the insider information and the HFT tricks and corporate extortion and what do they have? Performance trailing the market.  In sum they are just a bunch of guys who had a lucky hit once, got the reputation as geniuses and cashed in by forming a hedge fund.  There is even some question about their skills.  They underperform in one of the biggest bull markets in history?

But, we digress.  Schadenfreude is sweet to the tongue, but not a way to wisdom.

Instead pay attention to the market.  We often buy power bars, as Monday’s was.  We hung back a bit waiting for confirmation, and Tuesday was a cat and dog fight with contrarians pushing the market all over the place.  Now those guys appear to have retreated into their bear cave.  So we think adding on is reasonable now, and will be doing that probably into next week.  We don’t really think that the Scots will do something so insane as row their cockleshell off into the North Sea and make skirts unfashionable at weddings, but the Scots have done some pretty dotty things in the past and there is no way to assess market consequences — one way or the other. 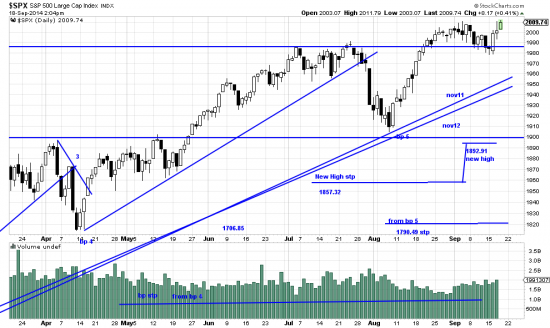 You will note that price has cleared the recent downwavelet.  Also from the point of view of Dow Theory the new high in the INDU confirms Dow bull signals and sets the stage for a new run.

Eye of the hurricane…