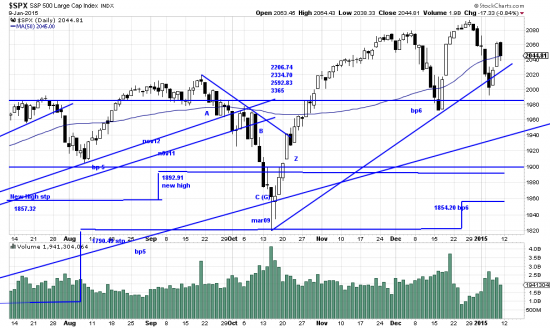 It’s said that George Soros gets a head splitting back ache when his positions are in trouble, or about to be in trouble.  We got one of those Thursday, but it was located in the region of the butt, as in pain-in-the-ass, as was proved to be the case Friday when the market ambushed us.  17 negative points is not a big deal in the longer scheme of things, a minor p-i-t-a.  What was annoying was the breaking of the pattern we thought pretty certain.  Now instead of the straight V bottom we thought was happening we have a knuckle ball.  As in–something different.  This may just be a zig in the wave, or it might mark the recovery wave as a B (beta) wave, meaning the low Tuesday would be tested by a C (gamma) wave.  We won’t know till next week.  Otherwise we remain long with no hedges.  We are going to work on the hedge question for readers who have expressed an interest.

Actually, in addition to the pain, we got uneasy wondering how long they were going to let us get away with exploiting this pattern.  If something works over and over don’t throw all your capital at it.  That will be the time they figured it out and ambush you.  Try as they might they can’t carry out an effective ambush on the bull market.  Too big for even the biggest, and the shorts have been repeatedly bloodied since mar09.  Good for them.  May it happen to them many times.  (Up until we reverse and go short,  which we will do.)

The weather forecast is for frozen fingers in Green Bay and continuing volatility in the cloud where the HFT guys are spoofing the market and making fools of the SEC.

We remain short oil and the euro.  Gold and silver are not investable at present– long or short.  It’s a shame we can’t short Washsington D.C. —  that would be the best short of a lifetime.

Blow off climax in the metals…