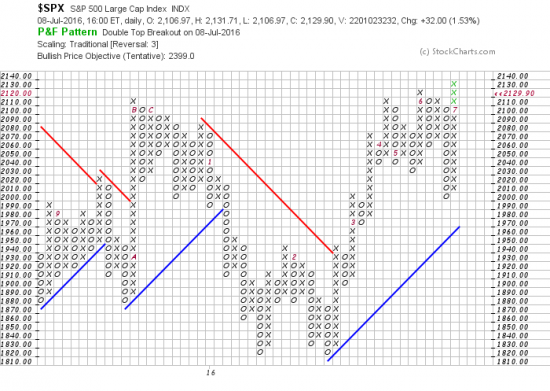 We recognize the cognative dissonance involved in being loud deniers of  forecasting and predicting on the one hand — and using the PnF system as a crystal ball (something of an exaggeration) on the other.  Well, you have to predict the future some way and this way is better than most.  And right now the system is looking for almost 2400.  We can believe that.  As they say, it might be fortune telling, but it’s our crystal ball.  Do not take any of this seriously.

We have taken the market seriously and put on very small positions in the S&P — and similarly in the silver. 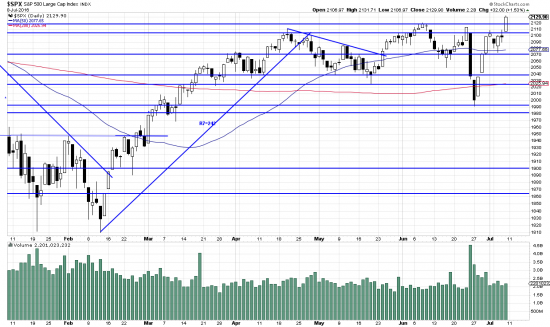 The SPX is a hair away from the all time high and has made a new high in the recent market phase.  It now appears clear that we will not see an a-b-c wave pattern here, but rest with a v shape recovery from the Brexit panic.  We are scaling in.

Though silver went parabolic it has –in the moment– apppeared to consolidate.  We increased our position.

We look at gold the same way and think both issues are acting under the same influences.  We chose silver over gold due to greater volatility.

The purpose of long sideways trends in the markete is to test the sincerity and dedication of investors.  It is also to  bore them to death so that they will leave the market to professionals — only to reenter when the professionals need them to participate in a blow off top.  Part of this testing consists of providing minimal rewards, thus encouraging even more the abandonment by the general investor.

Of course while the SPX may be grinding sideways some individual stocks may be roaring along.  This is tedious to us, not liking individual stocks.  But there are other alternatives.  For instance an issue which has great defensive capability and sometimes beats the general market.  Such an issue is the ETF NOBL

The NOBL is composed of the so called dividend aristocrats — stocks from the S&P 500 which have steadily increased their dividends over a period of some 20-25 years.

In addition to dividends the issue is less volatile than the SPX.  The SDY is another of these.  We think these (or one of) would be great investments for the long term.

You can always hide in Switzerland…and maybe you should…

Was that a truck that hit us? No just a computer glitch. GLD and $INDU.