Here we show the original long from 2003 after the tech bubble popped (B- bought).  Late 03 we attempted to short the market — mainly because we were not strictly using the Basing Points system, but we got long again early 04 and have been long ever since.

Notice where the trendline from 03 ends.  Interestingly very near the   stop calculated from the last Basing Point where we got short for the Bush Bear market  on Jan 8 08.   Late April 10 we warned that volatility was ominously low and that a downwave was due.  That downwave was even more violent than expected and included the flash crash.  To remind you of the violence of that period we include a wave chart of the period. 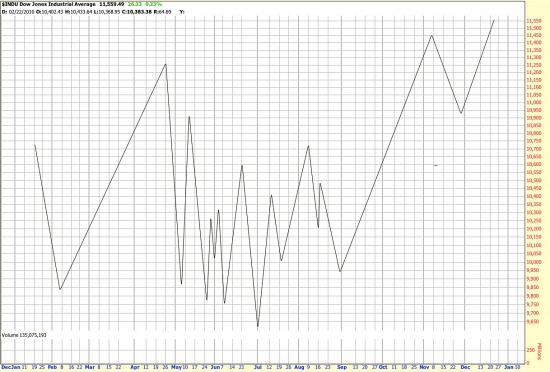 16 changes of direction to indicate how difficult the period was. 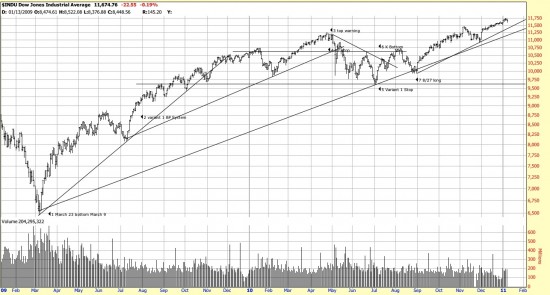 Here the market since  March 09.  In March 09 we remarked March 9th that the reaction had started.  The exact bottom.  We had been buying “lottery tickets”  for several months– pretty obvious when Ford is $1 and similar prices.  Variant 2 Basing Point method went long March 23  (1).  Variant 1 did not get long till late July, early August (2).  At Number 3   we warned of the top, and calculated a Variant 2 stop (4).  Interesting that this stop intersects almost exactly with the long term trendline.  At 5 the method was severely tested (Variant 1) by price hitting the stop which was calculated with a 5% filter.  While this was the system stop we observed it for only a day or so, then were back long.  During this period the punditry and talking heads were screaming two things:  Head and shoulders top and double dip.  But as we show at (6) we correctly identified a Kilroy (reverse H&S) Bottom.  Then at (7) on 8/27 we made a trading decision and added on to our longs.  We had been trading during the volatility, based on short term wave analysis.

Now price has broken over the April top.  And we feel (analyze) that a new leg of the bull market has begun.

Now why have we belabored the past at such length.  Simple.  So that our readers may develop the confidence they need to stick with long term trend following analysis when the heat is on.

Perverser and perverser. Gold teeters on edge (or over edge)