Our ADD, or ADHD, (or ADDicted) mind has been gnawing at the markets like a dog with a bone for weeks.  We think the economy is in a miserable state and will stay there until Congress makes some effort on the jobs front.  Good luck with that. That’s what we think.  We think Europe is in a depressing state.  We expect it to remain in that state until European leaders realize you can’t get euros out of a turnip, and you can’t get growth out of zero investment.

The NEBR (National Bureau of Economic Research) is trying to measure the economy now and pronounce their opinion (the official one) as to whether we have fallen back into the Great Recession. Our gut and our economic antennae tell us we are either in it or sliding into it.

What does that have to do with the market — well evidently nothing at the moment.  Obviously it will have something to do down the road.  But eat drink and be merry and trade like it will never end.    So we are stuck with the technical analysis of the moment.  And a good thing, because if you tried to invest on fundamentals — or your perception of them — you would be shooting your portfolio in the head like the last camel in the desert and setting off through the sands looking for an oasis.

Here is a brief summary of the past 9 months:  a long gentle upwave that ended in April with a broken trendline and a clear top formation — something like a double top.  A moderately severe downwave followed ending early June when the present upwave started that shows a pattern of higher highs and higher lows — bullish phenomena.  For the benefit of number technicians price is above the 50 and 200 day moving averages and –here, the PnF formation: 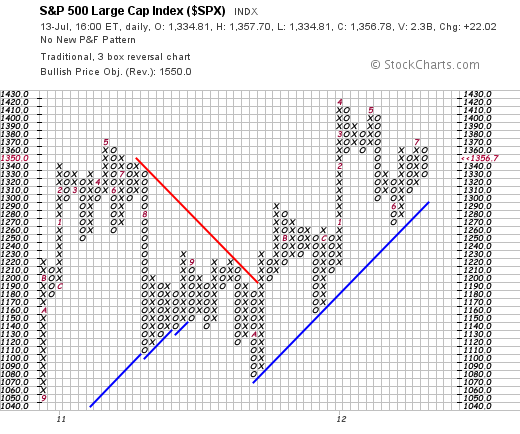 We’re cornered.  All the technical signs say be long — and, our intuition says be long.  Lots of talking heads and pundits and ersatz analysts are baying at the market like wolves at the moon predicting bear market.  In fact we would love to have some good shorts.  If you have any suggestions send them along.