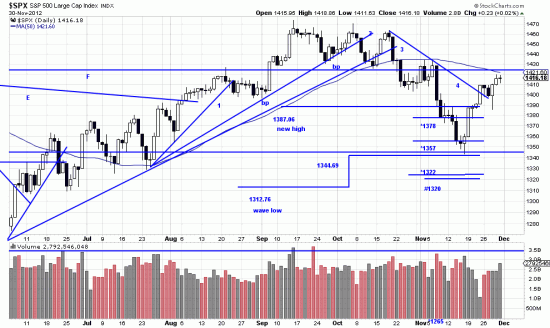 Although it appears that nothing happened last week except kabuki shows in Washington something did happen.  Of course the market showed its anxiety by popping up and down according to statements by the House Speaker or the President.  We regard these somewhat the same way we regard the clowns in the circus.  Amusing but of little value.  We think the inevitable is going to happen — taxes are going up.  Yawn said Warren Buffet — no real entrepreneur will give a damn.  And he’s right.  It’s just a change in the playing field.  But news hounds seize it as a pretext to drive the market.

But as seen at line 4 above prices have broken above line 4 in the Z wave.  We haven’t got all our hedges off but we think that long term long is the way to be.  And the fiscal cliff?  A tempest in a teaparty pot.  We expect it to happen, and though it may cause a little short term turbulence the market will adjust to it.

The broken line occured in the Qs also.  We are long the leveraged ETF (QLD). Undoubtedly this has something to do with Apple.

Which also broke the downtrend line.  WE have been in an especially treacherous period, when the market looks for long term trend stops and find them.  What you have to do when this occurs on a two or three day basis is to hop right back in.  The purpose of these downwaves is to discourage the general investor.

But it is our firm conviction that the major uptrend in the markets, and in Apple, is intact.  While some pundits and analysts keep growling like bears the fact is that is no technical basis whatsoever for a major bear break here.  Look at the markets before the 1987, 2001, 2008 breaks.  They are all preceded by long enthusiastic trends.  They don’t occur after a series of 4 to 7% downwaves– and they also give plenty of warning with broken trendlines and top formations.  We will shortly give a reference to some top studies we are currently doing which will illustrate these concepts.

A continuation of Getting technical about the Dow.