IWM looks to us like a promising chart.  It has just broken out from what could be a significant base.

It, like everything else, is waiting to see if the House of Representatives is going to play chicken at the debt ceiling cliff (like James Dean, rebels just because… because what we don’t know.) 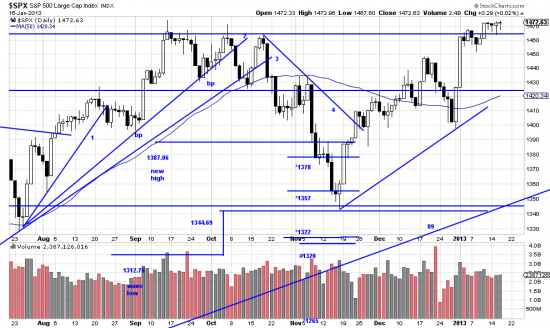 First, let us dispel our previous conjecture that the present formation might be a flag.  It’s not.  Upon its development we think it’s drift or a form of drift.  That is, listless marking time, waiting for Godot or for the suicide bombers in the House to blow themselves (and the country) up.

Listen.  From the economist’s (and the patriot’s) point of view we regard Washington with horror. Or, as  Kirkegaard would say, with fear and loathing.  But as a crypto-anarchist and lover of drama we watch with rapt fascination, the same way we watch the 49ers.  The trouble is the market takes these guys seriously, and that explains the present pattern — which might be compared to a small piglet watching a smiling, friendly  cobra.

But, given that they don’t blow up themselves and the market the technical pattern is bullish. Today the high was .55 from the September high.   As seen here PnF analysis looks for a target of 1620. 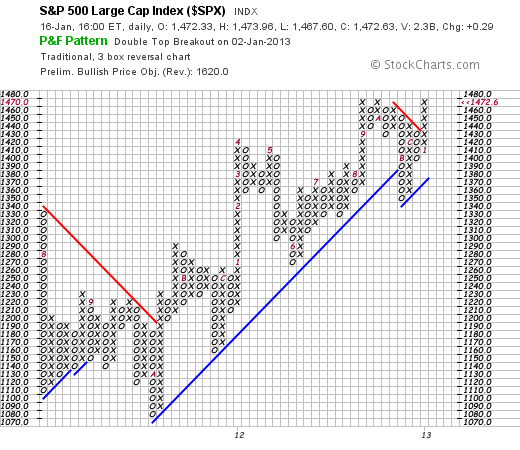 Do we believe this?  How many times do we have to say we don’t believe anything?  Not only are we crypto-anarchists, we are flaming agnostics about predictions.  We are not predictors, but interpreters.  Is it our considered opinion and analysis that there is at least one more wave in the Mar 09 bull market? Yes.  So long as we don’t get blown up by a Washington built IED.

Meanwhile back at the Apple drama.

Occasionally analysts confront charts which bamfoozle their systems, defy regular analysis and drive them crazy.  Voilà. Apple.  By Basing Point analysis, trendline analysis, crystal ball analysis, Biblical analysis, hope and prayer this issue should have been tossed when it broke the original uptrend line.  But this is Apple.  Apple makes a habit of creating industries and revolutionizing technology — and its products are unspeakably cool.  That said we think this is the bottom.

We looked at Apple options and they are pretty expensive.  And the timing is very difficult.  It would probably be necessary to go out 6 months or more.