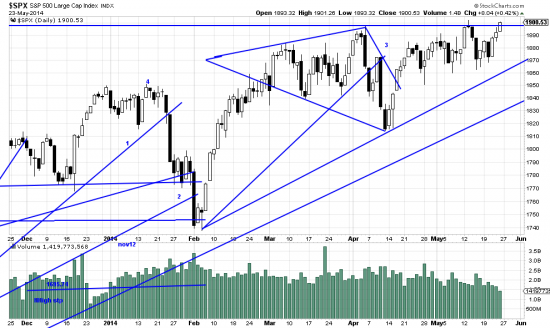 With Memorial day on us it is worth reminding readers of the horrors of World War I.  After a series of indecisive battles (and the German failure to follow the von Schlieffen plan) WWI settled in to trench warfare in which unimaginable hardships were borne in the trenches by both sides.  Clueless generals sent troops on both sides assaulting impregnable defensive positions manned by machine guns.  No generals were killed.  But hundreds of thousands of regular soldiers died — sometimes for 50 yards of territory.  (The von Schlieffen plan said that  to defeat France it was necessary  to encircle Paris –Let the last man on the right brush the channel with his sleeve, said the  deceased Count.  But as the Germans destroyed the French and British they broke the plan and wheeled in front of Paris, offering their flank to the French.  Paris taxicabs ferried French soldiers to the battle and the German machine was stopped.)

It is an apt metaphor for what we have been doing in the market for 5 months.  On January 15 the SPX was at 1850 (4).  Friday it closed (Hurray! Triumph at last.) at 1900.  During this time we have constantly counseled our readers to have patience.  Whether this period represented a forming top, or a consolidation, good trading practice says to stick with the trend until it is proved to have reversed.  The new high in the SPX, PnF signals and Dow Theory signals all say that the trend should continue — perhaps in more trench warfare.  But that all waits to be confirmed.

The broadening top fizzled, as did the potential heads and shoulders in the IWM  and QQQ, and in fact we bought the Qs Friday as there  was a clear buy signal.  Does this mean we are out of the trenches?  Remains to be seen. 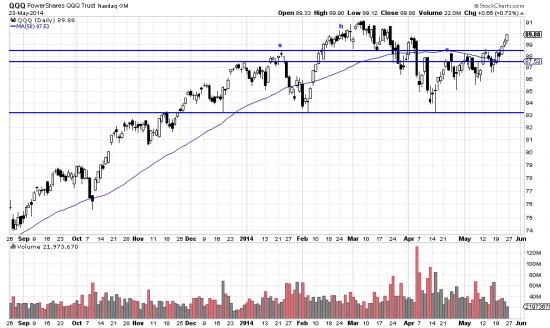 No one won the trench war.

The art and science of top analysis

Is it safe to go back in the water?