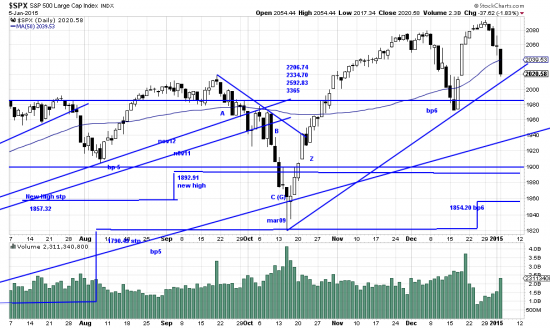 We recently remarked on the increasing violence of market activity in the SPX, noting the series of waves leading up to the present strange wave.  Today we have a 37 point sell off in the SPX.  This was set up by the head fake of Friday which appeared  to be the end of the downwave from the recent high.  It is a strange formation — a (so far) 3% sell off so quickly after the violent 4%  sell off of  December.  The immediate cause is the presence of extreme anxiety in the professional trading community.  They had a bad 2014 and tried to make up for it in Decembeer –both ways, long and short.  They are like a horse spooked by an previous encounter with a rattlesnake.  Now they hear a baby rattle and they jump 20 feet and hit the ground running.  Nonetheless even a spooked horse can start a stampede when panicing in a nervous cattle herd.

We think this is unlikely and that the sell off will expend itself before major technical damage is done.  Once again when it reverses we will see the rocket up for a few days.  Having been kicked in the head by the horse we laid on a partial hedge in the SPXU.  There are only two tactics of use when all the cattle about you are losing their heads — 1.  extremely agile hedging and 2.  sitting on the long term stops.  Time after time the latter has proved the more profitable strategy.  Almost as good a strategy as keeping your head when all about you are losing theirs.

If we look at the market as being purposeful, the purpose of this present violence  is to set up the next long wave.

The turkey that ate bears…