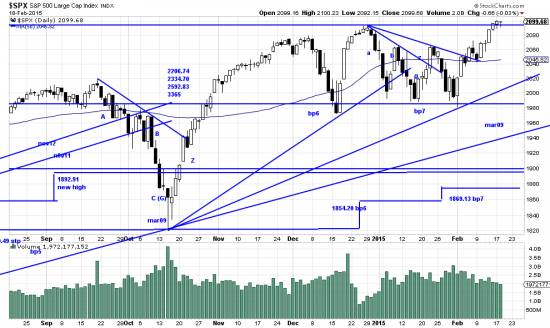 We are often amazed at the things people will say in public — exposing themselves to the van Allen belt of flying eggs where they can get egg on their faces.  Morgan Stanley has opined that we could see an S&P advance of 1000 points by 2018.  Of course that is pretty close to our rule of seven analysis posted on this chart, and we don’t disagree with it, but we were just noodling and playing with the tools in our technician’s toolbox.  Maybe Morgan Stanley heard about the rule of seven — or maybe they have a spy reading our letters.  As all our readers know we don’t stand behind anything that remotely resembles a forecast or prediction, except when we do.

Anyway we never ventured to put a time target on our analysis, and three years for Morgan Stanley leaves room for a roomful of sins and back tracking, and most people will have forgotten it anyway — except those who put their capital on the line.

The forecast is made at an inflexion point. It looks to us like prices have broken out of the congestion range we have been grinding through since December.  During that time  we theorized that we might be forming a top but it appears that unpleasant eventuality is now behind us.  In fact the bold investor might want to add on and commit more capital to the market.  We will be doing that for our personal accounts.  A period like that just passed (one assumes) acts to build a base for a further advance, besides flushing out of the market the unwashed and unworthy. 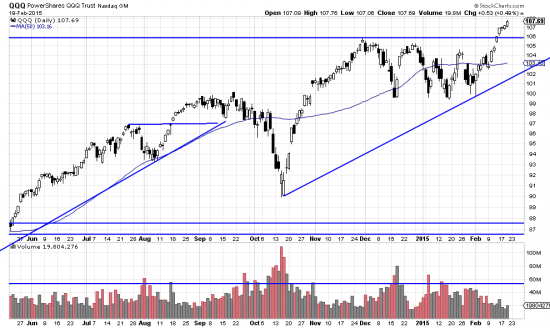 If you wanted to diversify dthere is GVAL the golbal value ETF.  This has been a losing bet for some time, but the scale may be tipping and anyway one would abandon this if it showed signs of a downtrend. 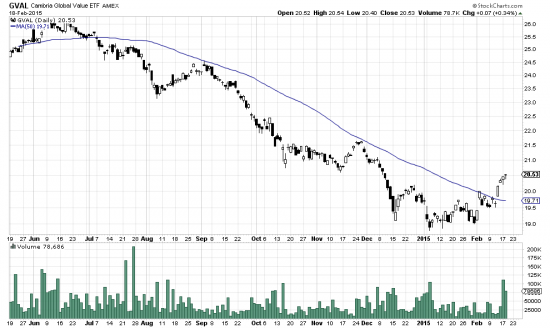 In truth almost everything we have looked at the last few days looks  buyable.  At the risk of getting egg on our face we might see some muted volatility for awhile.  (Please don’t quote us and if it does get volatile we’ll deny it.)

Summing up:  Readers who did the mature thing –sat on their positions and observed system stops are the winners out of all this.  One of these days we’re going to do that.  Don’t depend on us to keep our word.

Prices teeter on edge of support….